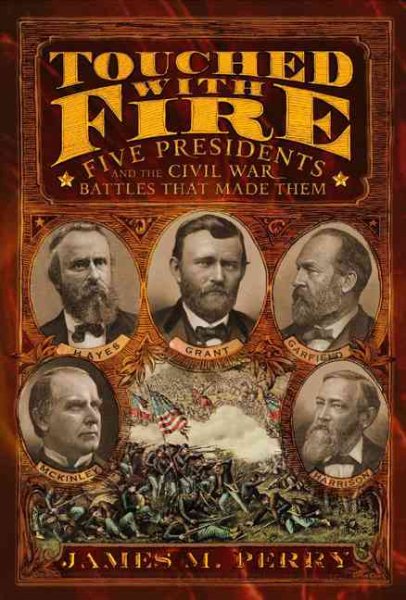 Examines the lives and careers of five presidents who served in the military during the Civil War, and the affect the war had on their presidency. Read More
In Touched with Fire, James M. Perry reintroduces us to these five men: Ulysses S. Grant, Rutherford B. "Ruddy" Hayes, James A. "Jamie" Garfield, Benjamin "Little Ben" Harrison, and William "Mack" McKinley. Men who - with the exception of Grant - we dimly remember. This is the story they wanted told. What mattered most to them was that they had participated in terrible, bloody events that had saved the Union.Perry describes how Grant won undying fame at Fort Donelson and how that victory sent him inexorably on his way to the White House. Gatfield was a bit of a rogue, a fascinating, devious, and brilliant man. He conducted his own victorious campaign in the mountains of eastern Kentucky and went on to play a major role in events leading up to Chickamauga. Hayes, a good and decent man, fought in more than a dozen major battles and was wounded four times, once seriously. McKinley was just eighteen years old when he enlisted in the Army but he saw much active duty in Hayes's regiment. Harrison took part in Sherman's celebrated - and vilified - March to the Sea, and distinguished himself a number of times.Drawing on diaries, letters, and other first-hand accounts, Perry recreates the battles that brought these men fame and extols the courage that made them extraordinary leaders, especially under fire. The Civil War was their finest hour, and Touched with Fire sheds new light on these Gilded Age presidents and makes for a vivid reminder of what a truly great generation can accomplish. Read Less

Goodreads reviews for Touched With Fire: Five Presidents And The Civil War Battles That Made Them

Arrogant Armies: Great Military Disasters And the Generals B...

A Report in Depth on Barry Goldwater A new Look at a Preside...