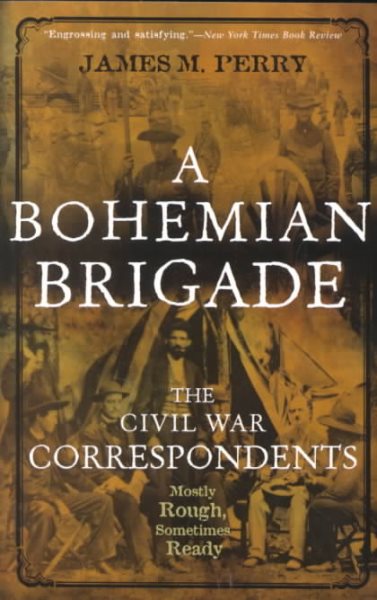 Reveals how journalists during the Civil War would acquire information, and discusses the impact of the free press on the opposing armies of the period. Read More
"LIKE THE WAR ITSELF, THIS IS A STORY OF REMARKABLE PERSONAL DRAMA."-New York Times Book ReviewMore Praise for A Bohemian Brigade"Highly engaging . . . Perry has a special feel for his topics and a keen eye for detail."-Wall Street Journal"James Perry has written a compelling and detailed account of the men who did their best to cover-and, at times, fight-the first instant-news war. This book tells the story of the sometimes painful birth of the modern war correspondent."-Dan Rather, CBS News"Civil War reporters were a colorful breed: rough, rowdy, courageous, competitive-occasionally even accurate. Jim Perry, a great reporter himself, recognizes these bohemian adventurers and brings them vividly to life in this entertaining and eye-opening look at the men who crafted the rough draft of our history."-Tony Horwitz, author of Confederates in the Attic: Dispatches from the Unfinished Civil War"A Bohemian Brigade is a joyous account of a time when reporters did not take themselves seriously-nor did anyone else-written by one of the great reporters of his generation."-Sander Vanocur, The History Channel Read Less

Touched With Fire: Five Presidents And The Civil War Battles...

Arrogant Armies: Great Military Disasters And the Generals B...

A Report in Depth on Barry Goldwater A new Look at a Preside...