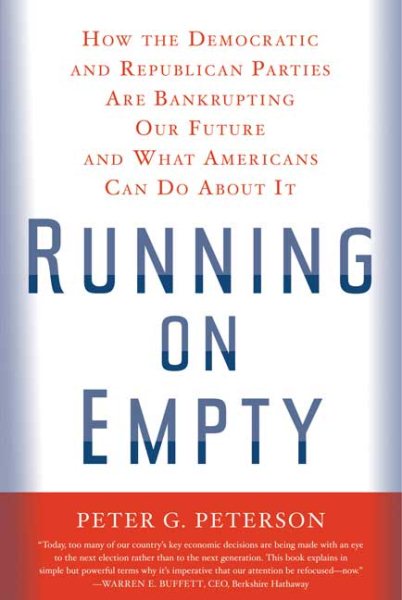 Offers a look at the potentially devastating repercussions of the budget and foreign trade deficits, explaining how reckless tax cuts, out-of-control spending, and corrupt accounting in Congress may affect the future of America. Read More
When Bush came to office in 2001, the 10-year budget balance was officially projected to be at a surplus of $5.6 trillion. But after three big tax cuts, the bursting of the stock-market bubble, and the devastating effects of 9/11on the economy, the surplus has evaporated, and the deficit is expected to grow to $ 5-trillion over the next decade. The domestic deficit is only the half of it. Given our $500 billion trade deficit and our anemic savings rate, we depend on an unprecedented $2 billion of foreign capital every working day. If foreign confidence were to wane, this could lead to the dreaded hard landing.Peter G. Peterson--a lifelong Republican, chairman of the Blackstone Group, and former secretary of commerce under Nixon--shatters the myths with hard facts and a harrowing view of the twin deficit's real impact. Republicans and Democrats alike have mortgaged America's future through reckless tax cuts, out-of-control spending and Enron-style accounting in Congress. And the situation will only get worse as the Baby Boom generation begins to retire, making unprecedented demands on entitlement programs like Social Security and Medicare. Despite what Bush says, we are on a path that could end in economic meltdown, and we simply cannot grow out of the deficit.In Running On Empty, Peterson sounds the warning bell and prescribes a set of detailed solutions which, if implemented early, will prevent the need for draconian measures later. He takes us behind the politicians' smoke-and-mirror games, and forcefully explains what we must do to rescue the future of our country. Read Less

Goodreads reviews for Running on Empty: How the Democratic and Republican Parties Are Bankrupting Our Future and What Americans Can Do About It

The Education of an American Dreamer: How a Son of Greek Imm...

Steering Clear: How to Avoid a Debt Crisis and Secure Our Ec...