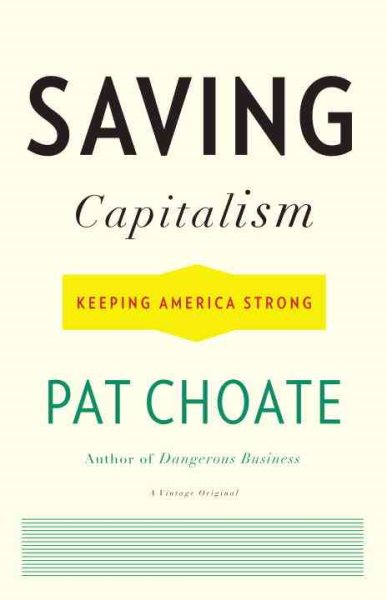 The economist author of Agents of Influence presents a sobering assessment of the current financial crisis that argues for bold reform measures, challenging popular beliefs about free-market absolutism while recommending specific changes to the tax system, global trade rules, and worker benefits. Original. Read More
When the U.S. financial structure collapsed in fall 2008, it quickly became clear that our system of market capitalism was broken, endangered by decades of absolutist market dogma, shortsighted policies, and the abandonment of America's working people. Now, as the Obama administration seeks to repair the country's economy, one thing is clear: this crisis calls for drastic reforms. Regrettably, the government's response, so far, has been inadequate.In Saving Capitalism, economist and bestselling author Pat Choate offers six game-changing actions that can strengthen the U.S. economy now and stimulate long-term, self-sustaining, noninflationary economic growth that will create millions of better jobs. Here are proposals for:• Major tax reform• All-encompassing financial regulation• A strong social safety net• A major infrastructure program• Ways and means to balance U.S. trade with the rest of the world• The renewal of national innovationUrgent and provocative, Saving Capitalism is an accessible and informative dissection of the gravest threat our economy has faced since the Great Depression, and a bold and creative blueprint for the future. Read Less

Hot Property: The Stealing of Ideas in an Age of Globalizati...

Dangerous Business: The Risks of Globalization for America