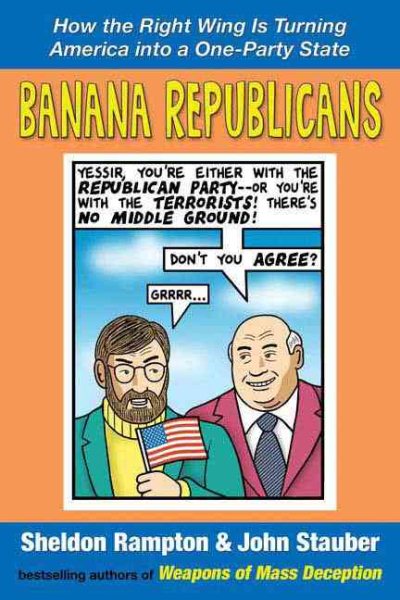 Argues that a right-wing conspiracy is sweeping America, examining how the Republican party and its supporters in lobbying groups, the legal system, and the media are undermining dissent and destroying American pluralistic politics. Read More
The bestselling authors of Weapons of Mass Deception expose how the "right-wing conspiracy," as represented by the GOP and its mouthpieces in media, lobbying groups, and the legal system, is undermining dissent and squelching pluralistic politics in America. The U.S. economy is on the ropes, fear grips the nation, and we are embroiled in two overseas military quagmires with no end in sight. Outside its borders, the United States is hated and feared as never before. For the first time in living memory, a single party-the Republicans-controls every major institution of the federal government: the White House, the Supreme Court, the Senate and House of Representatives-not to mention the "fourth branch of government," the mass media. How did this come to pass? Banana Republicans reveals how the national GOP maintains its hold on power through the systematic manipulation of the electoral system, the courts, the media, and the lobbying establishment. The book examines: * The legacy of the Florida ballot scandal, and how it has played out in the recall movement in California-and other states, where recall efforts are under way-and in the redistricting controversy in Texas. * How a GOP echo chamber systematically spreads its views through conservative media giants-e.g., Clear Channel, Fox-and highly placed columnists, journalists, and opinion makers. * How the Bush administration is loading the federal courts with a generation of demagogues, and smearing the names of legislators who attempt to stand in its way. * How House Majority Leader Tom DeLay has strong-armed traditional lobbying firms into exclusively hiring Republicans, so that even K Street is political, rather than merely opportunistic. * How the GOP has equated dissent with treason-e.g., Defense Secretary Donald Rumsfeld accusing war critics of abetting terrorism. * How the Bush administration uses its power to punish dissent, such as the leaking of a CIA agent's name to the press, and unprecedented lawsuits against activist organizations such as Greenpeace. Read Less

Goodreads reviews for Banana Republicans: How the Right Wing is Turning America Into a One-Party State

Toxic Sludge is Good For You: Lies, Damn Lies and the Public...

Trust Us We're Experts: How Industry Manipulates Science and...

Weapons of Mass Deception: The Uses of Propaganda in Bush's...