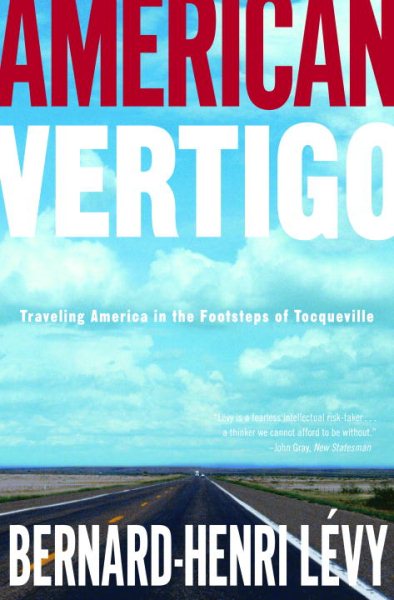 A French writer travels America in the footsteps of Alexis de Tocqueville to provide a glimpse into American politics, culture, and society and what it means to be an American from the perspective of a foreign observer. Read More
What does it mean to be an American, and what can America be today? To answer these questions, celebrated philosopher and journalist Bernard-Henri Lévy spent a year traveling throughout the country in the footsteps of another great Frenchman, Alexis de Tocqueville, whose Democracy in America remains the most influential book ever written about our country. The result is American Vertigo, a fascinating, wholly fresh look at a country we sometimes only think we know. From Rikers Island to Chicago mega-churches, from Muslim communities in Detroit to an Amish enclave in Iowa, Lévy investigates issues at the heart of our democracy: the special nature of American patriotism, the coexistence of freedom and religion (including the religion of baseball), the prison system, the “return of ideology” and the health of our political institutions, and much more. He revisits and updates Tocqueville’s most important beliefs, such as the dangers posed by “the tyranny of the majority,” explores what Europe and America have to learn from each other, and interprets what he sees with a novelist’s eye and a philosopher’s depth. Through powerful interview-based portraits across the spectrum of the American people, from prison guards to clergymen, from Norman Mailer to Barack Obama, from Sharon Stone to Richard Holbrooke, Lévy fills his book with a tapestry of American voices–some wise, some shocking. Both the grandeur and the hellish dimensions of American life are unflinchingly explored. And big themes emerge throughout, from the crucial choices America faces today to the underlying reality that, unlike the “Old World,” America remains the fulfillment of the world’s desire to worship, earn, and live as one wishes–a place, despite all, where inclusion remains not just an ideal but an actual practice.At a time when Americans are anxious about how the world perceives them and, indeed, keen to make sense of themselves, a brilliant and sympathetic foreign observer has arrived to help us begin a new conversation about the meaning of America. Read Less

Goodreads reviews for American Vertigo: Traveling America in the Footsteps of Tocqueville

The Empire and the Five Kings: America's Abdication and the...

By Kennedy, Steven B. (TRN)

Left in Dark Times: A Stand Against the New Barbarism

The Genius of Judaism

By Kennedy, Steven B. (TRN)