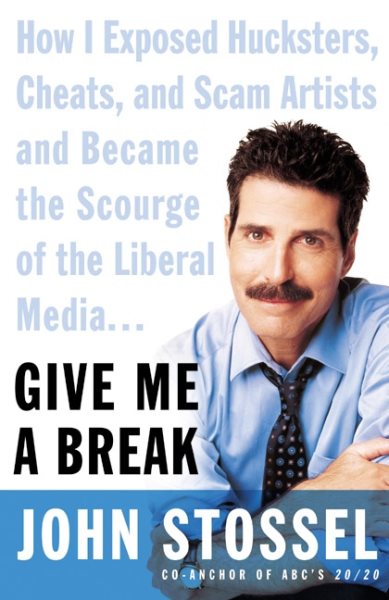 The ABC correspondent and co-anchor of "20/20" recounts his transition from consumer reporter to free-market advocate, citing his efforts to thwart scam artists while posing strong arguments for free markets and free speech. Read More
Ballooning government? Millionaire welfare queens? Tort lawyers run amok? A $330,000 outhouse, paid for with your tax dollars? John Stossel says, "Give me a break."When he hit the airwaves thirty years ago, Stossel helped create a whole new category of news, dedicated to protecting and informing consumers. As a crusading reporter, he chased snake-oil peddlers, rip-off artists, and corporate thieves, winning the applause of his peers. But along the way, he noticed that there was something far more troublesome going on: While the networks screamed about the dangers of exploding BIC lighters and coffeepots, worse risks were ignored. And while reporters were teaming up with lawyers and legislators to stick it to big business, they seldom reported the ways the free market made life better.In Give Me a Break, Stossel explains how ambitious bureaucrats, intellectually lazy reporters, and greedy lawyers make your life worse even as they claim to protect your interests. Taking on such sacred cows as the FDA, the War on Drugs, and scaremongering environmental activists -- and backing up his trademark irreverence with careful reasoning and research -- he shows how the problems that government tries and fails to fix can be solved better by the extraordinary power of the free market.He traces his journey from cub reporter to 20/20 co-anchor, revealing his battles to get his ideas to the public, his struggle to overcome stuttering, and his eventual realization that, for years, much of his reporting missed the point.Stossel concludes the book with a provocative blueprint for change: a simple plan in the spirit of the Founding Fathers to ensure that America remains a place "where free minds -- and free markets -- make good things happen." Read Less

Goodreads reviews for Give Me a Break: How I Exposed Hucksters, Cheats, and Scam Artists and Became the Scourge of the Liberal Media...

No, They Can't: Why Government Fails-But Individuals Succeed

No, They Can't: Why Government Fails-But Individuals Succeed

Myths, Lies, and Downright Stupidity: Get Out the Shovel --...