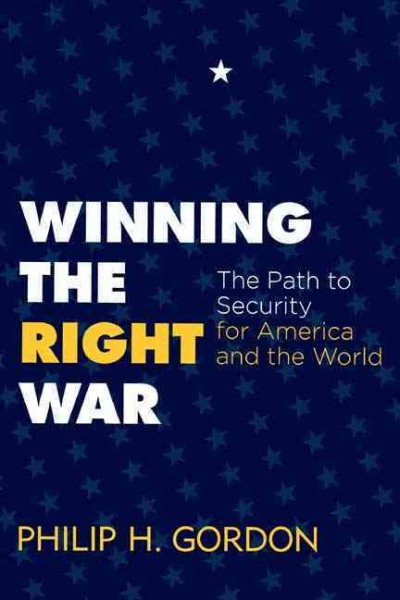 Argues that, six years into the War on Terror, our enemies are stronger and more numerous than ever, and calls for a new approach that uses the strategies of patience, containment, alliances, and faith in our values alongside military strength. Read More
A new strategy for American foreign policy that looks beyond Iraq and changes the way we think about the war on terror. Six years into the “war on terror,” are the United States and its allies better off than we were before it started? Sadly, we are not, and the reason is that we have been fighting – and losing – the wrong war.In this paradigm-shifting book, Philip H. Gordon presents a new way of thinking about the war on terror and a new strategy for winning it. He draws a provocative parallel between the world today and the world of the Cold War, showing how defense, development, diplomacy, and the determination to maintain our own values can again be deployed alongside military might to defeat a violent and insidious ideology. Drawing on the latest scholarly research, his own experience in the White House, and visits to more than forty countries, he provides fresh insights into the nature of the terrorist challenge and offers concrete and realistic proposals for confronting it.Gordon also asks the question “What would victory look like?” – a topic sorely missing from the debate today. He offers a positive vision of the world after the war on terror, which will end not when we kill or capture all potential terrorists but when their hateful ideology collapses around them, when extremists become isolated in their own communities, and when Americans and their allies will again feel safe. His vision for promoting these goals is achievable and realistic, but only if the United States changes course before it is too late. As we look beyond the presidency of George W. Bush, we must seize the opportunity to chart a new course to security for America, the West, and the world at large. The stakes could not be higher. Read Less

Goodreads reviews for Winning the Right War: The Path to Security for America and the World

Allies At War: America, Europe and the Crisis Over Iraq

The Transatlantic Allies and the Changing Middle East (Inter...