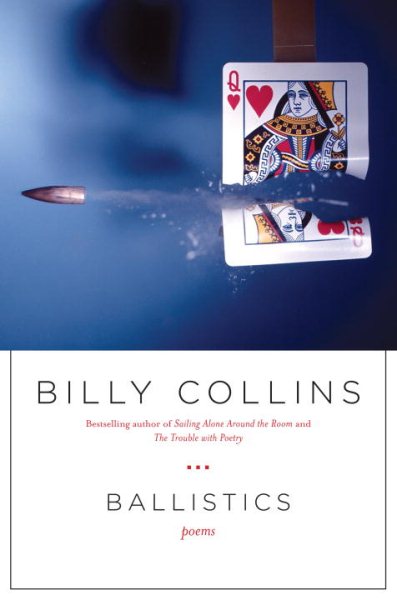 Offers a collection of works by the former Poet Laureate contemplating the pleasures and discontents of ordinary life, including poems such as "Evasive Maneuvers," " Looking Forward," and "The Four-Moon Planet." Read More
A Billy Collins poem is instantly recognizable. “Using simple, understandable language,” notes USA Today, the two-term U.S. Poet Laureate “captures ordinary life–its pleasure, its discontents, its moments of sadness and of joy.” His everyman approach to writing resonates with readers everywhere and generates fans who would otherwise never give a poem a second glance.Now, in this stunning new collection, Collins touches on a greater array of subjects–love, death, solitude, youth, and aging–delving deeper than ever before. Ballistics comes at the reader full force with moving and playful takes on life. Drawing inspiration from the world around him and from such poetic forebears as Robert Frost, Paul Valéry, and eleventh-century poet Liu Yung, Collins drolly captures the essence of an ordinary afternoon: All I do these drawn-out daysis sit in my kitchen at Pheasant Ridgewhere there are no pheasants to be seenand, last time I looked, no ridge.Collins reflects on his solitude:If I lived across the street from myselfand I was sitting in the darkon the edge of the bedat five o’clock in the morning,I might be wondering what the lightwas doing on in my study at this hour.And he meditates on the effects of love:It turns everything into a symbollike a storm that breaks loosein the final chapter of a long novel.And it may add sparkle to a morning,or deepen a night when the bed is ringed with fire.As Collins strives to find truth in the smallest detail, readers are given a fascinating, intimate glimpse into the heart and soul of a brilliantly thoughtful man and exemplary poet. Read Less