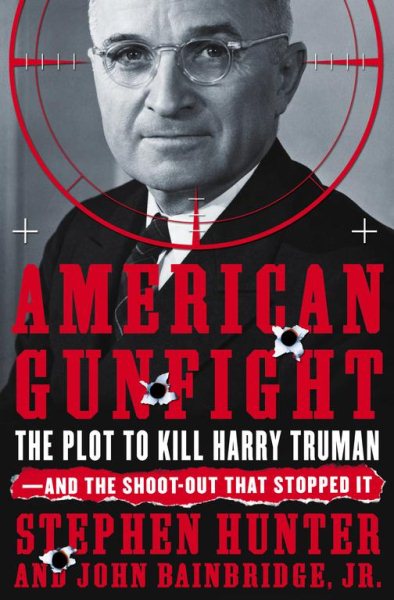 Chronicles the day in 1950 when two Puerto Rican Nationalists attempted to kill Harry S. Truman, in an account told from the perspectives of the Secret Service agents and White House policemen who risked their lives in a deadly gunfight. Read More
American Gunfight is the fast-paced, definitive, and breathtakingly suspenseful account of an extraordinary historical event -- the attempted assassination of President Harry Truman in 1950 by two Puerto Rican Nationalists and the bloody shoot-out in the streets of Washington, D.C., that saved the president's life.Written by Pulitzer Prize-winner Stephen Hunter, the widely admired and bestselling novelist and author of such books as Havana, Hot Springs, and Dirty White Boys, and John Bainbridge, Jr., an experienced journalist and lawyer, American Gunfight is at once a groundbreaking work of meticulous historical research and the vivid and dramatically told story of an act of terrorism that almost succeeded. They have pieced together, at last, the story of the conspiracy that nearly doomed the president and how a few good men -- ordinary guys who were willing to risk their lives in the line of duty -- stopped it.It is a book about courage -- on both sides -- and about what politics and devotion to a cause can lead men to do, and about what actually happens, second by second, when a gunfight explodes.It begins on November 1, 1950, an unseasonably hot afternoon in the sleepy capital. At 2:00 P.M. in his temporary residence at Blair House, the president of the United States takes a nap. At 2:20 P.M., two men approach Blair House from different directions. Oscar Collazo, a respected metal polisher and family man, and Griselio Torresola, an unemployed salesman, don't look dangerous, not in their new suits and hats, not in their calm, purposeful demeanor, not in their slow, unexcited approach. What the three White House policemen and one Secret Service agent cannot guess is that under each man's coat is a 9mm German automatic pistol and in each head, a dream of assassin's glory.At point-blank range, Collazo and then Torresola draw and fire and move toward the president of the United States.Hunter and Bainbridge tell the story of that November day with narrative power and careful attention to detail. They are the first to report on the inner workings of this conspiracy; they examine the forces that led the perpetrators to conceive the plot. The authors also tell the story of the men themselves, from their youth and the worlds in which they grew up to the women they loved and who loved them to the moment the gunfire erupted. Their telling commemorates heroism -- the quiet commitment to duty that in some moments of crisis sees some people through an ordeal, even at the expense of their lives. Read Less

Goodreads reviews for American Gunfight: The Plot to Kill Harry Truman--and the Shoot-out that Stopped It