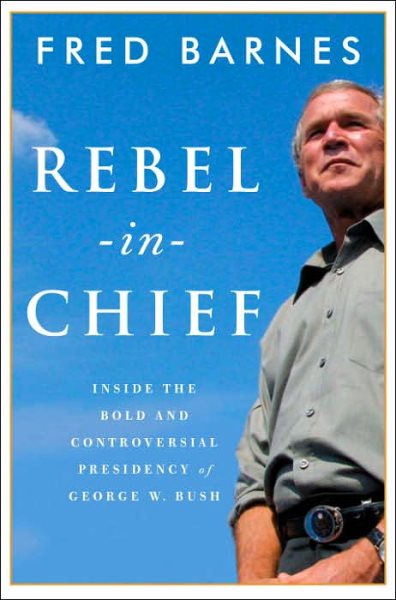 Drawing on interviews with President Bush and other figures in the administration, a study of how the president operates analyzes his influence on conservative ideology and assesses the long-term influence of his political agenda. Read More
“You can’t worry about being vindicated, because the truth of the matter is, when you do big things, it’s going to take a while for history to really understand.” —President Bush, in an exclusive interview with Fred Barnes for Rebel-in-ChiefWith Rebel-in-Chief, veteran political reporter Fred Barnes provides the defining book on George W. Bush’s presidency, giving an insider’s view of how Bush’s unique presidential style and bold reforms are dramatically remaking the country—and, indeed, the world. In the process, Barnes shows, the president is shaking up Washington and reshaping the conservative movement.Barnes has gained extraordinary access to the Bush administration for Rebel-in-Chief, conducting rare one-on-one interviews with President Bush, Vice President Dick Cheney, Secretary of State Condoleezza Rice, Defense Secretary Donald Rumsfeld, and many other close presidential advisers. That access, along with Barnes’s extensive independent reporting and interviewing, produces an eye-opening look at this highly consequential—and controversial—presidency. Rebel-in-Chief reveals:• How Bush acts as an “insurgent force” in the nation’s capital—“a different kind of president” who is turning the Washington establishment on its ear• How Bush is redefining conservatism for a new era—and creating a new Republican majority• The inside story of how Bush has revolutionized American foreign policy—and how the president's crusade for democracy would have been anathema to Bush himself only five years ago• When and why Bush decided to go into Iraq, even knowing that he was putting his political future at risk• How a White House aide you've probably never heard of is shaping the Bush vision• The surprising and important ways Bush's faith affects critical presidential decisions• How Bush has outmaneuvered his political opponents and surprised members of the press who have dismissed him as an intellectual bantamweight• How Bush routinely defies conventional wisdom because of his contempt for elite opinion and halfway reforms (“small-ball,” he calls them)—and why he usually winsGeorge W. Bush billed himself as a “different kind of Republican.” He has proved to be a different kind of president, too. And Fred Barnes’s riveting behind-the-scenes account helps us understand how much this “Rebel-in-Chief ” is reshaping the world around us. Also available as a Random House AudioBook and an eBook Read Less

Goodreads reviews for Rebel-in-Chief: Inside the Bold and Controversial Presidency of George W. Bush

Rebel in Chief: Inside the Bold and Controversial Presidency...

A Cartoon History of the Reagan Years