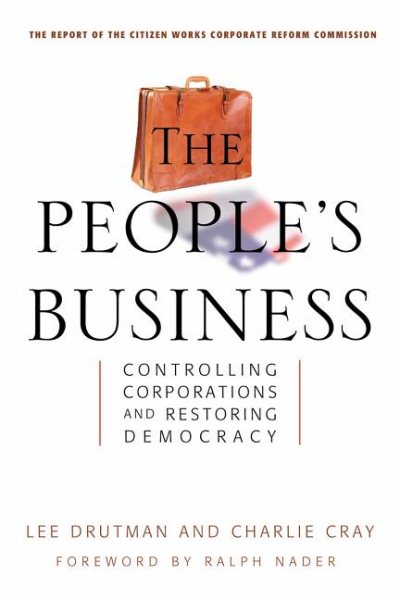 The authors present a series of strategies designed to challenge corporate power and take back the world from the greediest one percent of the world's population, showing readers how to build effective coalitions. Read More
Giant corporations wield excessive influence over our lives, often with frightening consequences: environmental destruction, political corruption, increased polarization of wealth, and stagnating wages and benefits. The rampant epidemic of accounting fraud, tax avoidance, outsourcing and war profiteering in recent years has reconfirmed the widespread conviction that corporations are getting increasingly out of control, with potentially dangerous consequences for the communities where they operate, their own employees and even for their owners, the shareholders. The People’s Business tells us what we can do to fight back. Drutman and Cray show how corporations achieved their current privileged position and offer a comprehensive approach for reforming them so that they serve as engines of public prosperity, rather than as the tools of private plunder. They present recommendations from the prestigious members of the Citizen Works Commission on Corporate Reform—which includes such notable members as Ralph Nader, David Korten, Herman Daly, Medea Benjamin, and many others—to outline a clear-headed plan of action to: Get corporations out of politics Establish truly public-minded regulation of corporate behavior Combat unfair market domination by a handful of large corporations Crack down on corporate crime Challenge the corporate claim to constitutional rights Bolstered with relevant history and recent examples, The People’s Business details immediate measures for effectively reforming the corporation. Read Less

Marvelous Wonders of the Polar World being a Complete and Au...

The ghost in the balance sheet