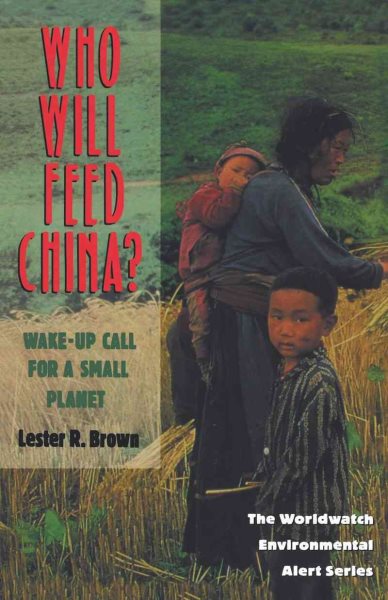 Discusses the impact of China's future need to import grain on world food prices and outlines supply problems which will result as world production struggles to meet an unprecedented demand Read More
To feed its 1.2 billion people, China may soon have to import so much grain that this action could trigger unprecedented rises in world food prices. In Who Will Feed China: Wake-up Call for a Small Planet, Lester Brown shows that even as water becomes more scarce in a land where 80 percent of the grain crop is irrigated, as per-acre yield gains are erased by the loss of cropland to industrialization, and as food production stagnates, China still increases its population by the equivalent of a new Beijing each year. When Japan, a nation of just 125 million, began to import food, world grain markets rejoiced. But when China, a market ten times bigger, starts importing, there may not be enough grain in the world to meet that need - and food prices will rise steeply for everyone. Analysts foresaw that the recent four-year doubling of income for China's 1.2 billion consumers would increase food demand, especially for meat, eggs, and beer. But these analysts assumed that food production would rise to meet those demands. Brown shows that cropland losses are heavy in countries that are densely populated before industrialization, and that these countries quickly become net grain importers. We can see that process now in newspaper accounts from China as the government struggles with this problem. Read Less

Goodreads reviews for Who Will Feed China?: Wake-Up Call for a Small Planet (Worldwatch Environmental Alert)

Plan B 4.0: Mobilizing to Save Civilization

The Great Transition: Shifting from Fossil Fuels to Solar an...