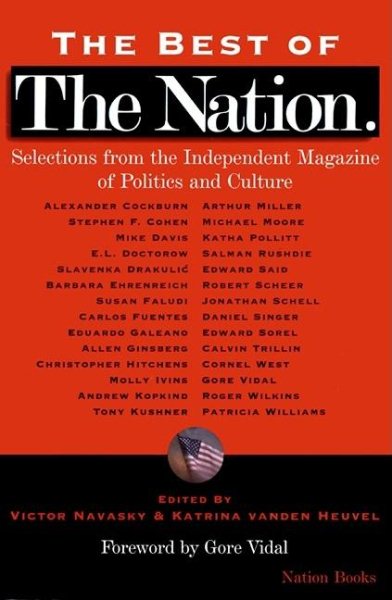 Articles published in "The Nation" during the 1990s include contributions by E.L. Doctorow, Susan Faludi, Allen Ginsberg, Molly Ivins, Arthur Miller, Michael Moore, Salman Rushdie, and Calvin Trillin. Read More
For 135 years The Nation magazine has embodied the critical spirit of dissenting journalism, giving voice to the passionate witnesses whose engagement with today's controversies has startled, provoked, and entertained. As E. L. Doctorow wrote of The Nation, "The editors never published anything less than what was urgently on their minds." Here is Patricia Williams on the Million Man March; Tony Kushner on gay liberation; William Styron on Prozac and Halcion; Susan Sontag on Bosnia; Jonathan Schell on the case for abolishing nuclear weapons; and Erica Jong's response to the Modern Library's list of the past century's 100 greatest books -- a list of her own. Finally, Michael Moore asks, "Is the Left Nuts? Or Is It Me?" Read Less

Goodreads reviews for The Best of The Nation: Selections from the Independent Magazine of Politics and Culture (Nation Books)

Meltdown: How Greed and Corruption Shattered Our Financial S...

Taking Back America: And Taking Down the Radical Right (Nati...