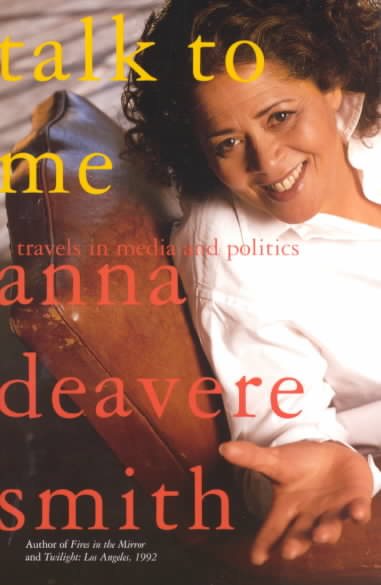 Drawing on five years of research and more than four hundred interviews, the author of Fires in the Mirror offers an inside glimpse of American politics at work as she provides a provocative study of politicians and other Washington insiders and the lexicon of power and politics in the United States. Reprint. 30,000 first printing. Read More
Anna Deveare Smith's award-winning one-woman shows were borne of her uniquely brilliant ability to listen. In Talk to Me she applies her rare talent to the language of political power in America.Believing that character and language are inextricably bound, Smith sets out to discern the essence of America by listening to its people and trying to capture its politics. To that end she travels to some of America's most conspicuous places, like the presidential conventions of 1996, and some of its darkest corners, like a women's prison in Maryland. And along the way she interviews everyone from janitors to murderers to Bill Clinton himself. Memoir, social commentary, meditation on language, this book is as vastly ambitious as it is compellingly unique. Read Less

Goodreads reviews for Talk to Me: Travels in Media and Politics

Fires in the Mirror

Letters to a Young Artist: Straight-up Advice on Making a Li...