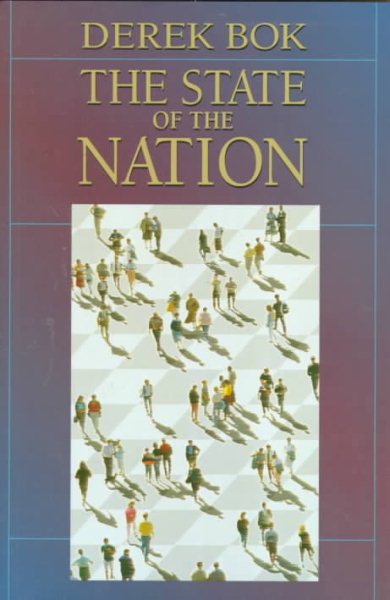 An assessment of current conditions in the United States cites five areas that Americans consider most important Read More
Never before have Americans been so anxious about the future of their society. But rarely has anyone offered a clear statement about why, in a nation so prosperous, free, and stable, we tend to assume that the country is in dire straits and that the government can do little to help. This book is just such a statement, an eloquent assessment of where America stands, how our society has changed in the past half-century, and who or what is responsible for our current frustrations.Derek Bok examines the nation's progress in five areas that Americans generally consider to be of paramount importance: economic prosperity, quality of life, opportunity, personal security, and societal values. He shows that although we are better off today in most areas than we were in 1960, we have performed poorly overall compared with other leading industrial nations. And when it comes to providing adequate health care at a reasonable cost, educating our young people for high-skilled jobs, alleviating poverty and urban blight, and reducing crime, our record has been dismal. Comparing the United States with other leading industrial nations on more than sixty key indicators, Bok shows that we rank below average in more than two-thirds of the cases and at the bottom in more than half.What has caused this decline, and what can be done about it? In virtually all important areas of American life, Bok concludes, government policies have played a significant, often decisive role in accounting for our successes as well as our failures. But whereas others call for downsizing the federal government, Bok argues that government is essential to achieving America's goals. In short, Ronald Reagan was only half right. Government is the problem. But it is also the most important part of the solution. By assessing the state of the nation and identifying the reasons for its current condition, this book helps set the agenda for improving America's performance in the future. Read Less

Goodreads reviews for The State of the Nation: Government and the Quest for a Better Society

Our Underachieving Colleges: A Candid Look at How Much Stude...

Beyond the Ivory Tower: Social Responsibilities of the Moder...

Universities in the Marketplace: The Commercialization of Hi...