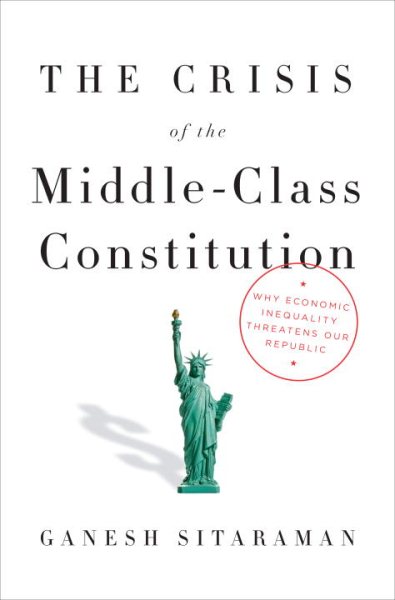 Argues that America's strong and sizeable middle class is actually embedded in the framework of the nation's government and its founding document and discusses the necessity of taking equality-establishing measures. Read More
In this original, provocative contribution to the debate over economic inequality, Ganesh Sitaraman argues that a strong and sizable middle class is a prerequisite for America’s constitutional system. A New York Times Notable Book of 2017 For most of Western history, Sitaraman argues, constitutional thinkers assumed economic inequality was inevitable and inescapable—and they designed governments to prevent class divisions from spilling over into class warfare. The American Constitution is different. Compared to Europe and the ancient world, America was a society of almost unprecedented economic equality, and the founding generation saw this equality as essential for the preservation of America’s republic. Over the next two centuries, generations of Americans fought to sustain the economic preconditions for our constitutional system. But today, with economic and political inequality on the rise, Sitaraman says Americans face a choice: Will we accept rising economic inequality and risk oligarchy or will we rebuild the middle class and reclaim our republic?  The Crisis of the Middle-Class Constitution is a tour de force of history, philosophy, law, and politics. It makes a compelling case that inequality is more than just a moral or economic problem; it threatens the very core of our constitutional system. Read Less

Goodreads reviews for The Crisis of the Middle-Class Constitution: Why Economic Inequality Threatens Our Republic

You Can Witness with Confidence

The Jersey Brothers: A Missing Naval Officer in the Pacific...