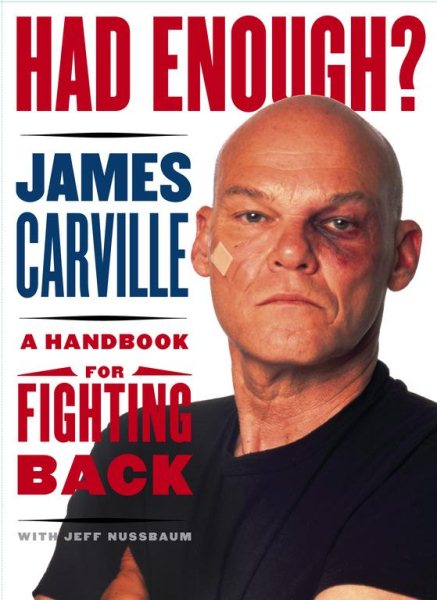 The political consultant offers a roadmap for freeing the country from influence peddling, war mongering, tax cutting, hypocritical right-wing policies and politicians, and outlines the solutions for progressive Americans. Read More
Have you had enough of George W. Bush and the Republican right? Are you sick and tired of the tax-cutting, environment-desecrating, secret-keeping, influence-peddling, war-mongering, free speech-hating hypocrites who occupy America's halls of power? If so, you have company -- James Carville.Like James Carville, America has been bruised and battered by the Republicans who are running our country and running it into the ground. The Bush administration has squandered a five-trillion-dollar surplus and created a five-trillion-dollar projected deficit. Their tax cut for the rich was supposed to create jobs -- but instead America has lost more than three million of them. This administration was supposed to bring honor and dignity to the White House but instead brought lies, leaks, secrecy, and fear. They promised to make the country stronger and safer but instead they've left us overstretched, isolated, and insecure.And Carville has had enough.In Had Enough? the legendary political adviser comes out of his corner swinging, taking on the Bush White House and the Republican leaders in Congress on every front -- from the economy to education to foreign affairs. But he doesn't just attack; he lays out constructive "had enough" solutions for healing the damage done by the Republicans and helping disheartened Democrats get back on their feet. In addition, he offers "Ten Rules for Progressives to Live By" and a new War Room mantra for a new era.Had Enough? is a rousing handbook for taking back the country, for fighting back the right wing, and for returning the power to the people. Read Less

Goodreads reviews for Had Enough?: A Handbook for Fighting Back