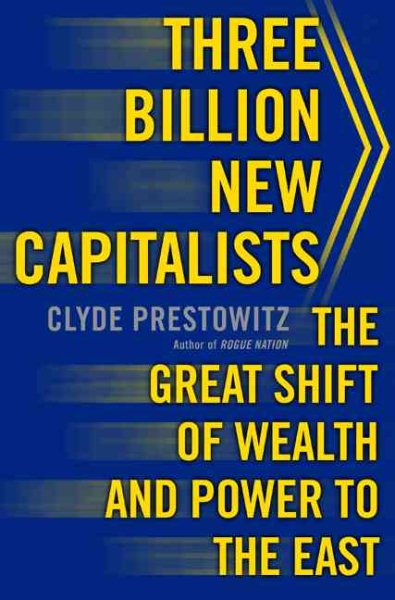 From one of our shrewdest economic trend-spotters, a wake-up call that prosperity is about to shift from the West to the East, and what we can do before it’s too late Read More
By the beginning of this century it was already commonplace to speak of the U.S. as a ?hyperpower,” to talk of its military, political, and economic clout as unprecedented in world history, and to assume that American dominance would continue at least throughout our lifetimes. It is conventional wisdom that America will have no serious rivals for at least a generation. But the American position is far more fragile and ephemeral than much of the world believes.Clyde Prestowitz shows the powerful yet barely visible trends that are threatening to end the six-hundred-year run of Western domination of the world. The trends include America’s increasingly unsustainable trade deficits; the equally unsustainable (and dangerous) buildup of massive dollar reserves in places like Japan and China; the end of America’s position as the world’s premier center for invention and technological innovation; the sudden entrance of 2.5 billion people in India and China into the world’s skilled job market; the role of the World Wide Web in permitting many formerly localized jobs to be done anywhere in the world; and the demographic meltdown of Europe, Japan, Russia, and, in later decades, even China.Three Billion New Capitalists is a clear-eyed and profoundly unsettling look at America’s and the world’s economic future, from an author with a history of predicting the important trends long before they become apparent to others. Read Less

Goodreads reviews for Three Billion New Capitalists: The Great Shift of Wealth and Power to the East