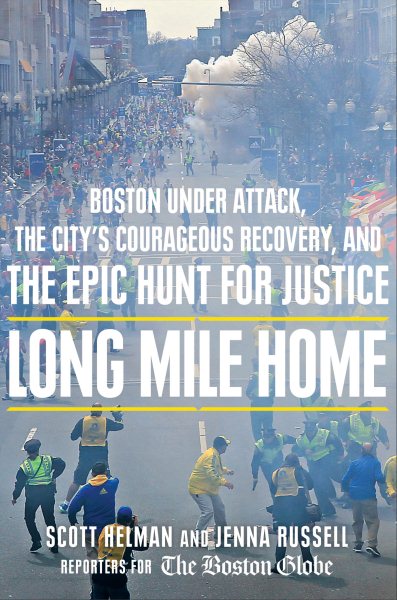 Two "Boston Globe" journalists who covered the Boston Marathon bombing tell the story of the week of April 15, 2013 through the eyes of seven principal characters, offering insight and stories of heroism and humanity. Read More
In the tradition of 102 Minutes and Columbine, the definitive book on the Boston Marathon bombing and subsequent manhunt for the Tsarnaev brothers, written by reporters from The Boston Globe and published to coincide with the first anniversary of the tragedy Long Mile Home will tell the gripping story of the tragic, surreal, and ultimately inspiring week of April 15, 2013: the preparations of the bombers; the glory of the race; the extraordinary emergency response to the explosions; the massive deployment of city, state, and federal law enforcement personnel; and the nation’s and the world’s emotional and humanitarian response before, during, and after the apprehension of the suspects. The authors, both journalists at The Boston Globe, are backed by that paper’s deep, relentless, and widely praised coverage of the event. Through the eyes of seven principal characters including the bombers, the wounded, a victim, a cop, and a doctor, Helman and Russell will trace the distinct paths that brought them together. With an unprecedented level of detail and insight, the book will offer revelations, insights, and powerful stories of heroism and humanity. Long Mile Home will also highlight the bravery, resourcefulness, and resiliency of the Boston community. It will portray the city on its worst day but also at its best. Read Less

Goodreads reviews for Long Mile Home: Boston Under Attack, the City's Courageous Recovery, and the Epic Hunt for Justice

By Salvalaggio, Nantas and Cesare Marchi