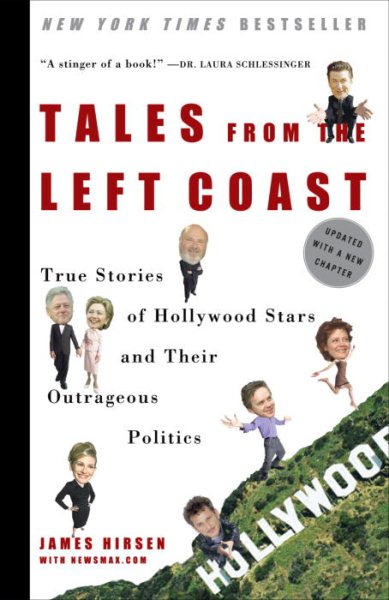 Examines the relationship between celebrity status and activism, and provides examples of celebrities using their power and influence to speak out on liberal political issues. Read More
It's common knowledge that Hollywood leans left. This peculiar phenomenon would not be all that important if it weren't for the fact that celebrity status has come to mean power. We're not talking about the kind of power that gets you out of a shoplifting fix or a cross-dressing jam. We're talking real political power.These days lots of stars try to use their status to mess with public policy. Never mind that Hollywood celebs often have no more training or expertise in the stuff they're promoting than the average John or Jane Q. What they do have is press coverage. That makes them influential. And they have star power. That makes them big draws for politicos who need to raise big bucks.In Tales from the Left Coast, author and political commentator James Hirsen aims his satirical squirt gun at Hollywood to expose celebrity "pundits" for what they really are: media circus hounds who can't tell populism from Bolshevism. Read Less

Goodreads reviews for Tales from the Left Coast: True Stories of Hollywood Stars and Their Outrageous Politics