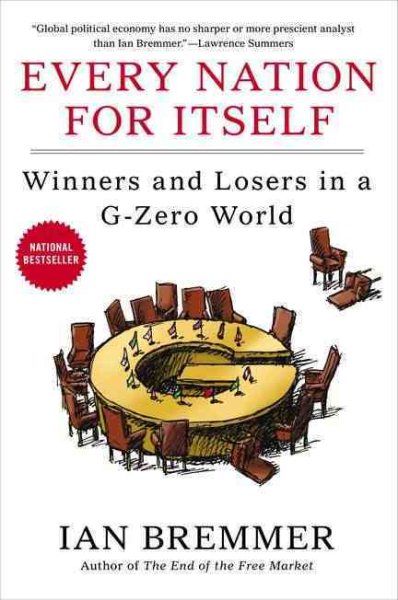 Posing arguments about growing G-20 restrictions, a portrait of an imminent "G-Zero" world without a single country driving international agendas predicts intensified conflicts. Read More
G-Zero — \JEE-ZEER-oh\ —nA world order in which no single country or durable alliance of countries can meet the challenges of global leadership. What happens when the G20 doesn’t work and the G7 is history. If the worst threatened—a rogue nuclear state with a horrible surprise, a global health crisis, the collapse of financial institutions from New York to Shang­hai and Mumbai—where would the world look for leadership? The United States, with its paralyzed politics and battered balance sheet? A European Union reeling from self-inflicted wounds? China’s “people’s democracy”? Perhaps Brazil, Turkey, or India, the geopolitical Rookies of the Year? Or some grand coalition of survivors, the last nations stand­ing after half a decade of recession-induced turmoil? How about none of the above? For the first time in seven decades, there is no single power or alliance of powers ready to take on the challenges of global leadership. A generation ago, the United States, Europe, and Japan were the world’s powerhouses, the free-market democracies that propelled the global economy forward. Today, they struggle just to find their footing. Acclaimed geopolitical analyst Ian Bremmer argues that the world is facing a leadership vacuum. The diverse political and economic values of the G20 have produced global gridlock. Now that so many challenges transcend borders—from the stability of the global economy and climate change to cyber-attacks, terrorism, and the security of food and water—the need for international cooperation has never been greater. A lack of global leadership will provoke uncertainty, volatility, competition, and, in some cases, open conflict. Bremmer explains the risk that the world will become a series of gated commu­nities as power is regionalized instead of globalized. In the generation to come, negotiations on economic and trade issues are likely to be just as fraught as recent debates over nuclear nonproliferation and climate change. Disaster, thankfully, is never assured, and Brem­mer details where the levers of power can still be found and how to exercise them for the common good. That’s important, because the one certainty of weakened nations and enfeebled institutions is that someone will try to take advantage of them. Every Nation for Itself offers essential insights for anyone attempting to navigate the new global play­ing field. Read Less

Goodreads reviews for Every Nation for Itself: Winners and Losers in a G-Zero World

Every Nation for Itself: What Happens When No One Leads the...

Us vs. Them: The Failure of Globalism

The J Curve: A New Way to Understand Why Nations Rise and Fa...