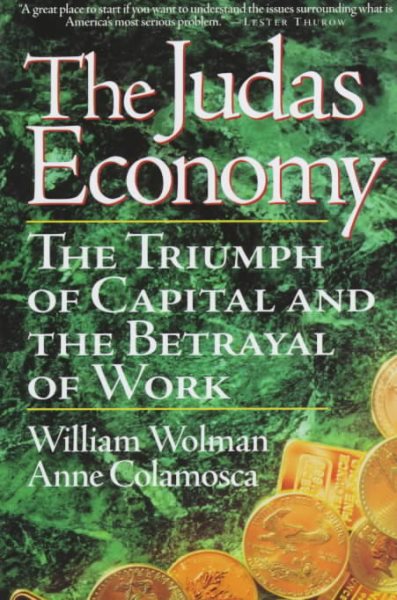 Explains why today's white-collar workers are so insecure about their jobs, despite a growing economy, and what can be done about it Read More
In this compelling and impassioned book, Business Week chief economist Bill Wolman and Anne Colamosca say what our business and government leaders are unwilling to admit, but most Americans know in their gut: in the brave new global economy, big money holds all the cards while workers - including white-collar professionals - are increasingly expendable.Until now, our leaders have chosen to ignore that the new global economy has rewritten the economic rules that have governed our thinking over the last fifty years. The consequences for American competitiveness and morale are dire. Yet there are many actions we could take, the authors show, if only Americans would not let themselves be blinded by a false faith in ever-rising stock market, and would begin to question the dogma of the politicians and economists who assure us that the American economy is getting healthier for all of us.The downsizing trend will continue, the authors argue, whether or not America grows more competitive. A vastly expanded global labor pool, and the ability of corporations to move more and more of their operations to low-wage developing countries, guarantees this. The authors underscore this point in a chilling chapter on the rise of an educated, high-tech, and high-morale workforce in Bangalore, India, ready for international work and a study in contrast with the demoralized American middle class.Wolman and Colamosca pointedly expose reengineering and other management fads as mainly ways for corporations to justify or obscure the firing of their workers. The insidious effect of these purges is that workers blame themselves for their fate. Furthermore, the panacea of the downsized - starting you own business - is a mirage, according to the authors. To succeed in the new economy you need capital, and contrary to the hype only a lucky few will prosper on their own. In clear terms the authors explain why, economically, this is so. The dynamics of the global securities markets, and the control of interest rates by the Federal Reserves and Bundesbanks of the world, perpetuate a system where fast economic growth is allowed only in developing countries. Meanwhile in the U.S. and the rest of the developed world inflation is kept low, so as to protect the value of the wealthy's financial assets. Any nation which strays from this policy is punished by a devastating outflow of investment capital. The result: few economic opportunities for American workers, combined with historically high real interest rates. Not surprisingly, worker morale and productivity are suffering, bankruptcies and debt are at record highs, and debt collection in predicted to be one of the fastest-growing industries in the U.S. in the next five years.In a final section, the authors provide suggestions for how capitalism can "save itself" and restore some balance of power to workers. Anything but conventional wisdom, The Judas Economy will be essential reading for all those concerned with the future of their jobs, and of the American economy. Read Less

Goodreads reviews for The Judas Economy: The Triumph Of Capital And The Betrayal Of Work

Lord of the Dead: The Secret History of Byron

We Were Soldiers Once... and Young: Ia Drang--The Battle Tha...