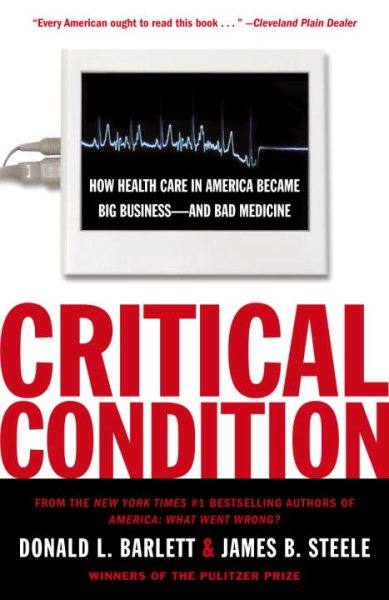 A team of Pulitzer Prize-winning investigative journalists offers a provocative exposé of America's health-care system, profiling the hospitals, doctors, and patients that have become trapped by the system, while the HMOs, pharmaceutical companies, and nursing home operators are reaping enormous profits. Reprint. 25,000 first printing. Read More
Exposing the most controversial, little-known practices of America&apos;s most flawed system, Time magazine&apos;s Pulitzer Prize-winning investigative team pulls back the curtain on the health care industry to explain exactly how things grew so out of control.Dirty examination and operating rooms in doctor&apos;s offices and hospitals . . . Health care executives pulling in millions in bonuses for denying treatment to the sick . . . More than 100 million people with inadequate or no medical coverage . . . This may sound like the predicament of a third-world nation, but this is America&apos;s health care reality today. The U.S. spends more on health care than any other nation, yet our benefits are shrinking and life expectancy is shorter here than in countries that spend significantly less per capita. Meanwhile, HMOs, pharmaceutical companies, and hospital chains reap tremendous profits, while politicians&apos;beholden to insurers and drug companies&apos;enact legislation for the benefit of the few rather than the many, while the entire system is on the verge of collapse. In Critical Condition, award-winning investigative journalists Donald L. Barlett and James B. Steele expose the horror of what health care in America has become. They profile patients and doctors trapped by the system and offer startling personal stories that illuminate what&apos;s gone wrong. Doctors tell of being second-guessed and undermined by health care insurers; nurses recount chilling tales of hospital meltdowns; patients explain how they&apos;ve been victimized by a system that is meant to care for them. Drug companies profit by selling pills in the same manner that Madison Avenue sells soap, while Wall Street rakes in billions by building up and then tearing down health care businesses. And politicians pass legislation perpetuating the injustices and out-right fraud the system encourages. By analyzing the industry and offering an insightful prescription for getting it back on the right track, Critical Condition is an enormously compelling investigative work that addresses the concerns of every American. Read Less

The Betrayal of the American Dream

America: Who Stole the Dream?