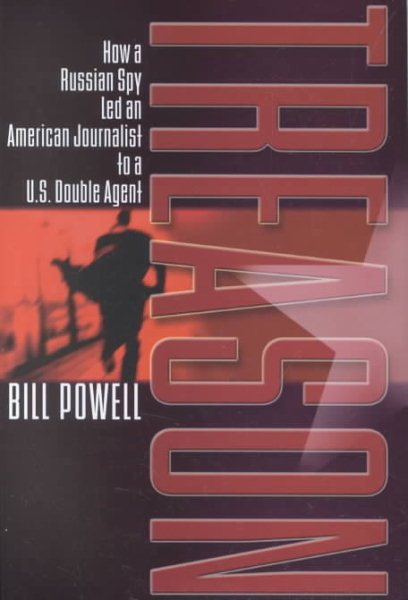 An American journalist traces the events that led to his discovery of Russia's most dangerous mole, describing encounters with double agent Vyacheslav Baronov, Russia's intelligence agency, and the FBI. Read More
A high-level Russian spy secretly working for the CIA is betrayed and arrested in Moscow. In Washington, counterintelligence agents search for a traitor in the upper reaches of the CIA. In the middle of it all is an American reporter whose chance encounter leads to the discovery of a double agent in the very heart of the American intelligence community. Treason is award-winning reporter Bill Powell's dramatic account of how he became involved in one of the highest-profile U.S. mole hunts of recent decades. Vyacheslav Baranov had just been released from a prison camp in Siberia when he walked into Newsweek bureau chief Bill Powell's office in Moscow in the summer of 1998. A former colonel in the GRU, the Soviet Union's once-feared military intelligence agency, Baranov had also been one of the highest-ranking spies on the CIA's payroll when he was arrested six years earlier. Baranov was convinced he had been betrayed, and the question that obsessed him -- and that would thrust Powell into the spying game -- was, by whom? Treason begins on the day Baranov walked into Powell's office, unannounced, saying he had a story Powell would find interesting. Powell was skeptical of Baranov's tale of spying for the CIA and being mishandled by the agency, but he was intrigued and agreed to see Baranov again. Over the course of several weeks, then months, as it became clear to him that Baranov was credible, Powell realized that he might have an extraordinary news story. Little did he know that his meetings with Baranov would put him in the middle of a top-secret mole hunt. The CIA had assumed that Baranov was one of more than a dozen Soviet double agents who had been betrayed by Aldrich Ames, a former counterintelligence officer in the agency's directorate of operations, who himself had been arrested by the FBI for spying for Moscow. Baranov had another theory about who had betrayed him, and through Powell -- his only means of communicating with the U.S. government -- he managed to pass crucial information to the FBI that convinced its mole hunters that he was right. A story of intrigue and furtive meetings with secret agents in Moscow, New York, Crete, Moldova, and Bangladesh, Treason recounts how Baranov was first recruited to spy for the GRU, and then by the CIA to spy for the United States. It describes the murky and dangerous world of spies and counterspies -- a world in which it is never clear whom you can trust -- as well as the lonely life of a double agent. It is also an eye-opening account of how the United States handles -- and sometimes mishandles -- its double agents. And it is a vivid firsthand account of what can happen when the worlds of journalism and espionage collide. Read Less

Goodreads reviews for Treason: How a Russian Spy Led an American Journalist to a U.S. Double Agent

All Colour Salads and Starters