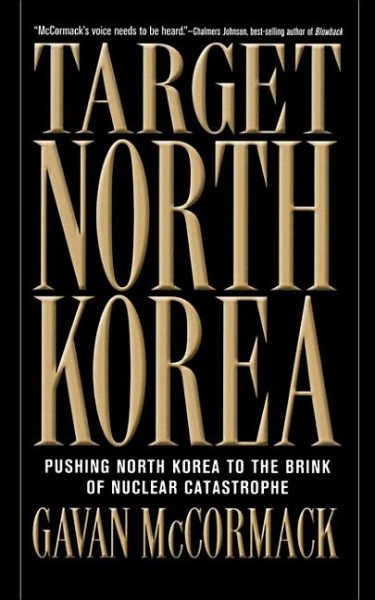 Reveals the tragic history of Korea that does not fit American stereotypes of the country, including Japan's historical and unrepentant role in creating and perpetuating a hostile North Korea. Read More
Paranoid and ravaged by famine, North Korea seems impenetrable to outsiders. George W. Bush, who has been involved in a nuclear stand-off with its leader, Kim Jong II, since October 2002, had described it as "the world's most dangerous regime." And with the overthrow of Saddam Hussein in April 2003, Kim Jong II is left a strong contender for the position of Public Enemy Number One.But what kind of state is the bitterest enemy of the United States, and what has its leader done to be so hated? Is it sheer madness that makes Kim stand defiant before the U.S. and the world when the devasting consequences are plain? Target North Korea explores the origins and character of North Korea, its state and society, its history and present confrontation with the world. If North Korea seems peculiar to us, it's because the contradictions and problems of the twentieth-century - from imperialism to colonialism to division, war, and nuclear weapons - were left to fester there untended into the twenty-first century. The intensity of North Korea's contemporary defiance reflects the bitterness of its historical experience, especially in its relationship with Japan.Gavan McCormack argues that in reality North Korea does not harbor an aggressive or fanatical threat to the region or the world, and that its defiance masks an appeal to normalize and "come in from the cold." However, its sense of pride and justice are such that pressure alone is unlikely to lead to resolution. The more the North Koreans are pushed against the wall, the more likely that at some point the regime will feel the desperate urge to strike out. Thus, permeated by xenophobia and leader-worship, North Korea has few cards in its pack: The nuclear one has been its joker for at least a decade. Read Less

The Measure of All Things: The Seven-Year Odyssey and Hidden...

The Cat Who Went Up the Creek