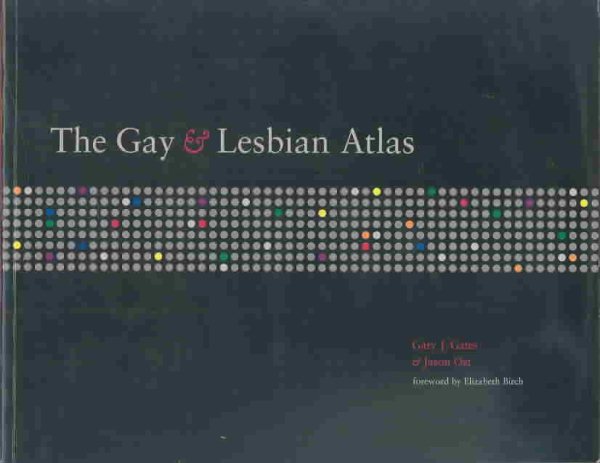 Based upon information collected in the 2000 US Census, this reference presents a detailed geographic account of America's gay and lesbian households. Each of the 50 states is covered in a two-page spread featuring colorful maps and charts showing the distribution of same-sex couples and highlighting their demographic characteristics, including age, race, and the proportion raising children. Twenty-five cities are also profiled in a similar fashion. Oversize: 11x8.5 Read More
While the words "we are everywhere" can be frequently heard at gay and lesbian political events, The Gay and Lesbian Atlas provides the first empirical confirmation of this rallying cry. Drawing on the most recent data from the U.S. Census, this groundbreaking work offers a detailed geographic and demographic portrait of gay and lesbian families in all 50 states plus the top 25 U.S. metropolitan areas. These results, presented in more than 250 full-color maps and charts, will both confirm and challenge anecdotal information about the spatial distribution and demographic characteristics of this community. It is probably no surprise that San Francisco, Key West, and western Massachusetts all host large gay and lesbian populations, but it might surprise some that Houston, Texas, contains one of the ten "gayest" neighborhoods in the country, or that Alaska and New Mexico have high concentrations of gay and lesbian couples in their senior populations. The Atlas is a unique and important resource for the political and public policy communities, public health officials, social scientists, and anyone interested in gay and lesbian issues Read Less