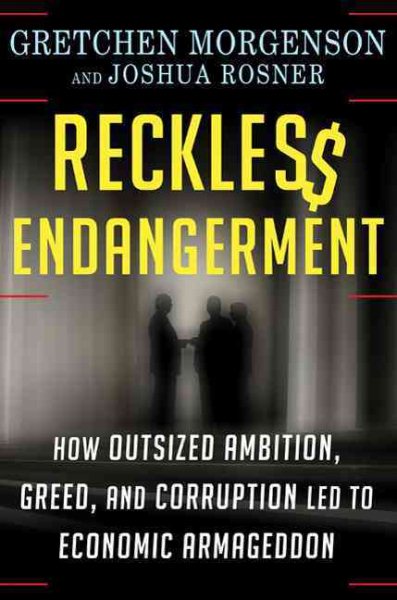 Argues that Washington, D.C. insiders, Wall Street and mortgage lenders were all to blame for the economic meltdown that still affects the United States today. Read More
A Washington Post Notable Nonfiction Book for 2011One of The Economist’s 2011 Books of the Year The New York Times's Pulitzer Prize-winning columnist reveals how the financial meltdown emerged from the toxic interplay of Washington, Wall Street, and corrupt mortgage lendersIn Reckless Endangerment, Gretchen Morgenson, the star business columnist of The New York Times, exposes how the watchdogs who were supposed to protect the country from financial harm were actually complicit in the actions that finally blew up the American economy. Drawing on previously untapped sources and building on original research from coauthor Joshua Rosner—who himself raised early warnings with the public and investors, and kept detailed records—Morgenson connects the dots that led to this fiasco. Morgenson and Rosner draw back the curtain on Fannie Mae, the mortgage-finance giant that grew, with the support of the Clinton administration, through the 1990s, becoming a major opponent of government oversight even as it was benefiting from public subsidies. They expose the role played not only by Fannie Mae executives but also by enablers at Countrywide Financial, Goldman Sachs, the Federal Reserve, HUD, Congress, the FDIC, and the biggest players on Wall Street, to show how greed, aggression, and fear led countless officials to ignore warning signs of an imminent disaster. Character-rich and definitive in its analysis, this is the one account of the financial crisis you must read. Read Less

A History of Russia