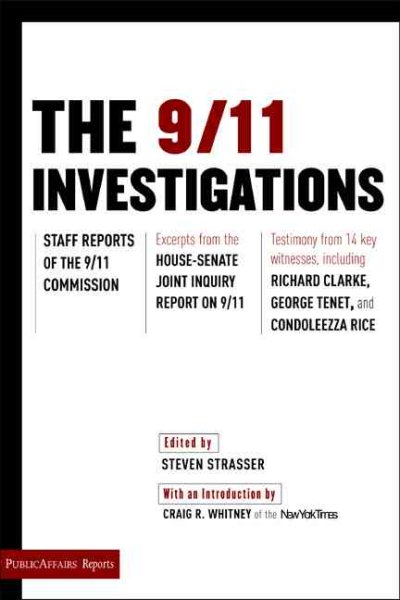 Get the facts without the spin Read More
The 9/11 Investigations lifts the curtain on the top-secret investigations into the worst attack in American history. Here in one place is the most salient information from both the Joint House-Senate Inquiry and the 9/11 Commission investigation, distilled into a narrative that readers can understand. First, The 9/11 Investigations presents the most shocking discoveries to emerge in the course of the investigations. Former Newsweek editor Steven Strasser has combed through the extensive investigative documents and extracted the most revelatory information about 9/11 itself--the al Qaeda plot, the terrorist attack, the emergency response--as well as troubling insights into the inner workings of our government: the decision-making process at the top levels of government, the miscommunication between the FBI and CIA, and the fatal oversights made by the Bush administration before the attacks. Second, The 9/11 Investigations explores the investigation process itself. A lead essay by Craig R. Whitney, assistant managing editor of the New York Times, places the 9/11 investigation into a historical context of other governmental investigations such as the Warren Report and the Pearl Harbor investigation. Whitney also explores the political power plays that have affected the investigation's progress, addressing these fundamental questions: Why hasn't the Bush administration cooperated fully with the 9/11 Commission? How has the administration's behavior affected the work of the Commission? Who will be held responsible for the intelligence and leadership failures revealed by the investigations? And perhaps most importantly: Will the 9/11 investigation help prevent such a tragedy from happening again? Are we any safer for their work? Together, these documents and analysis provide an in-depth look at how America has tried to deal with the shocking impact of the 9/11 attacks. Read Less

My Side of the Mountain (Puffin Modern Classics)

The Atkins Essentials: A Two-Week Program to Jump-start Your...

How to Improve Your Chess (Primary)

By Horowitz, I. A