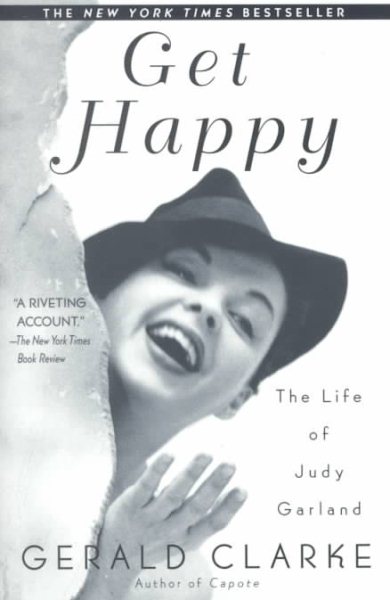 A portrait of the Hollywood superstar covers Garland's childhood, her struggles to establish herself in one of the industry's great studios, and her often traumatic love affairs. Read More
She lived at full throttle on stage, screen, and in real life, with highs that made history and lows that finally brought down the curtain at age forty-seven. Judy Garland died over thirty years ago, but no biography has so completely captured her spirit -- and demons -- until now. From her tumultuous early years as a child performer to her tragic last days, Gerald Clarke reveals the authentic Judy in a biography rich in new detail and unprecedented revelations. Based on hundreds of interviews and drawing on her own unfinished -- and unpublished -- autobiography, Get Happy presents the real Judy Garland in all her flawed glory.With the same skill, style, and storytelling flair that made his bestselling Capote a landmark literary biography, Gerald Clarke sorts through the secrets and the scandals, the legends and the lies, to create a portrait of Judy Garland as candid as it is compassionate. Here are her early years, during which her parents sowed the seeds of heartbreak and self-destruction that would plague her for decades ... the golden age of Hollywood, brought into sharp focus with cinematic urgency, from the hidden private lives of the movie world's biggest stars to the cold-eyed businessmen who controlled the machine ... and a parade of brilliant and gifted men -- lovers and artists, impresarios and crooks -- who helped her reach so many creative pinnacles yet left her hopeless and alone after each seemingly inevitable fall. Here, then, is Judy Garland in all her magic and despair: the woman, the star, the legend, in a riveting saga of tragedy, resurrection, and genius. Read Less

Goodreads reviews for Get Happy: The Life of Judy Garland

Get Happy: The Life of Judy Garland