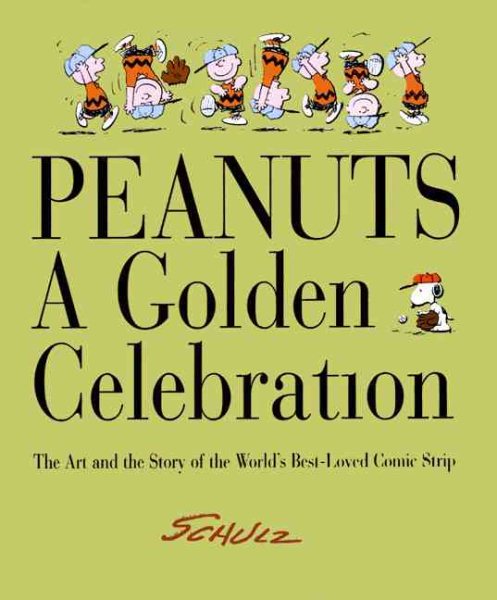 A 50th anniversary commemoration follows Peanuts characters from their 1950 inception through the present, and includes Schulz's comments on his work Read More
Will Charlie Brown ever get to kick the footballs? Will Schroeder finally return Lucy's love? Will Linus give up his security blanket? Will Peppermint Party ever pass a test? And, most importantly will Snoopy--that canine literary ace--ever be published? "To take a blank piece of paper and draw characters that people love and worry about is extremely satisfying. It really does not matter what you are called or where your work is placed as long as it brings some kind of joy to some person some place." -- Charles SchulzPeanuts: A Golden Celebration honors the momentous 50th anniversary of Charlie Brown and the gang with over 1,000 carefully selected strips that tell the story of Peanutslike no other book before. In Schulz's own words we learn how he came to create the world's most popular comic strip characters from nostalgic and sometimes painful memories of growing up--such as the agony of classroom Valentine exchange and the longing for a little red-haired girl. From the debut of Peanuts on October 2, 1950, to the golden jubilee, here are fifty years of the favorite episodes and the..."firsts," such as the first time Lucy pulled the football away from Charlie Brown. Included are scenes from the beloved Charlie Brown television. specials and the latest revival of the Broadway musical, You're a Good Man, Charlie Brown. These are the strips and events that have made Peanuts an awesome phenomenon, appearing in 2,600 newspapers worldwide everyday. Not bad for a round-headed kid called Charlie Brown. Let the celebration begin! Read Less

Goodreads reviews for Peanuts: A Golden Celebration: The Art and the Story of the World's Best-Loved Comic Strip

A Fragile Stone by Michael Card