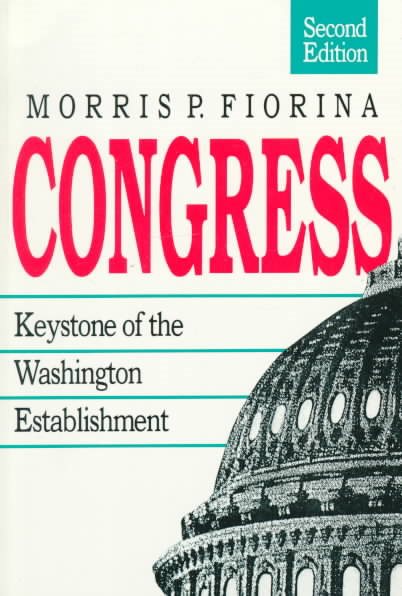 Exposes a self-serving game, typically played by congressmen to curry favor with constituents, that involves the creation and subsequent dissolution of government service agencies Read More
This highly readable book makes a strong case that a Washington establishment does exist and that members of Congress are responsible for it. Fiorina’s description of the self-serving interconnections that have developed between Congress, bureaucrats, and citizens with special interests leads to provocative and disturbing conclusions about the way our political system works. First published in 1977, this greatly enlarged second edition discusses the new developments that have occurred over the past twelve years, provides supportive data through the 1988 election, and reveals Fiorina’s current thoughts on Congress and American politics.Reviews of the first edition:“A stimulating indictment of the role of Congress in perpetuating a triangle of self-interest: constituents want benefits at someone else’s expense; Congressmen, seeking reelection, try to oblige; bureaucrats want growth for their agencies and accordingly provide favors for Congressmen. The general welfare is ill-served.”—Foreign Affairs“A fascinating book . . . on the factors which keep members of Congress in office . . . . A tract that no student of Congress can afford to neglect.”—Eric M. Uslaner, American Political Science Review“Written with insight, originality, and verve.”—Washington Monthly Read Less

American Government in a Changed World - The Effects of Sept...

Culture War? The Myth of a Polarized America (Great Question...