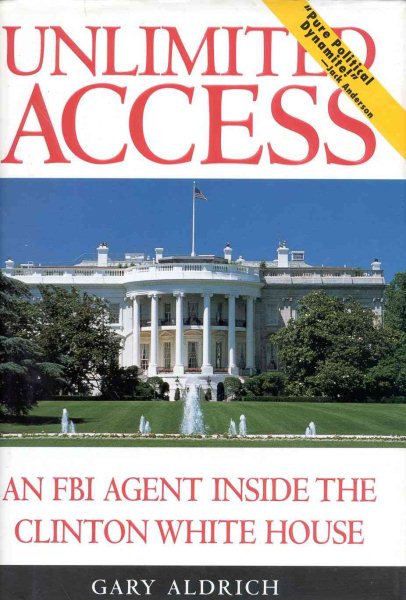 How the Clinton Administration turned the White House into Animal House. Read More
FBI special agent Gary Aldrich thought he had a plum assignment. As one of only two FBI agents posted at the White House, he performed the background checks on White House appointees - a peaceful yet dignified way to close an eventful career spent nabbing mobsters, drug dealers, and white-collar criminals.Aldrich had little interest in politics. But he was concerned with the honor of the presidency and with national security. So what he witnessed in the first months of the Clinton administration left him deeply troubled.Then alarmed. Then angered. And finally, halfway through Clinton's term, so thoroughly outraged that he felt compelled in conscience to leave the FBI.Unlimited Access is Aldrich's electrifying expose of a presidential administration with a great deal to hide - and willing to put America at risk to keep it hidden. Aldrich describes how a comprehensive security system that had been perfected through six presidencies was systematically dismantled by the Clintons so they could bring their friends into the White House - friends that previous administrations would have barred because of serious ethical or legal problems, some prosecutable.Unlimited Access also sheds new light on such White House scandals as "Nannygate," "Travelgate" and the mysterious case of Vince Foster - whose true motive for committing suicide was revealed to Aldrich, in a secured vault, by White House security director Craig Livingstone.Throughout Unlimited Access, Aldrich relies on eyewitness testimony: his own, and that of other White House insiders. He concludes with a mock FBI "background report" on the President and First Lady themselves - a report that will surely come as deeply disturbing to every loyal, law-abiding American. Read Less

Goodreads reviews for Unlimited Access: An FBI Agent Inside the Clinton White House

Unlimited Access : An FBI Agent Inside the Clinton White Hou...

Thunder on the Left: An Insider's Report on the Hijacking of...