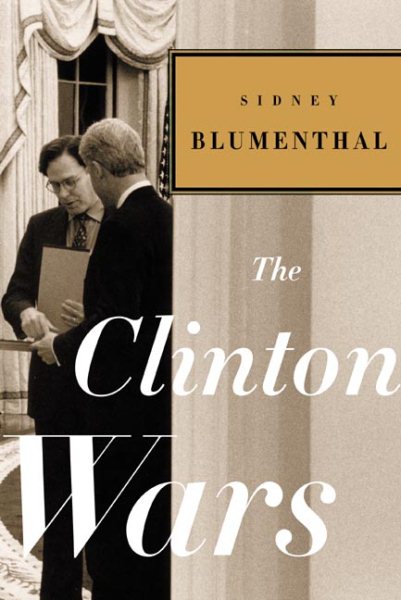 A senior advisor to Bill Clinton describes his relationship with the former president, noting his testimony at the impeachment trial and his admiration for Clinton's work in Kosovo, against Congress, and toward economic improvement. Read More
An invaluable history of an extraordinary presidency, and the chronicle of a generation’s political odyssey When in 1997 Bill Clinton appointed Sidney Blumenthal as a senior advisor, the former writer was catapulted into the front lines of the Clinton wars. From his first day in the White House until long after his appearance as the only presidential aide ever to testify in an impeachment trial, Blumenthal acted in or witnessed nearly all the battles of the Clinton years. His major new book—part history, part memoir—is the first inside account we have of the presidency of William Jefferson Clinton.The Clinton Wars begins in 1987, when Blumenthal first met Bill and Hillary Clinton. His chronicle of Clinton’s first presidential campaign and first term draws on his experiences as confidant to both the President and the First Lady, and is enriched with previously unpublished revelations about both. This remarkable personal interpretation goes far in explaining the polarizing nature of Clinton’s presence on the national scene. The narrative of Clinton’s second term is even more dramatic. Blumenthal takes special note of the battle that was waged within the media between the President’s detractors and defenders, which he expands into a vivid picture of Washington society torn apart by warring factions. But he does not neglect the wars fought on other fronts—in Kosovo, against Congress, and for economic prosperity. His remarkable book ends with the inside story of the fight to elect Al Gore in 2000 and extend the legacy of the Clinton-Gore Administration. Every page of this unrivaled, authoritative book, with its intimate insights into Clinton’s personality and politics, attests to Blumenthal’s literary skill, profound understanding of politics, and unique perspective on crucial events of our recent past. The Clinton Wars is a lasting contribution to American history. Read Less

Goodreads reviews for The Clinton Wars

Wrestling With His Angel: The Political Life of Abraham Linc...

A Self-Made Man: The Political Life of Abraham Lincoln Vol....

The Rise of the Counter-Establishment: The Conservative Asce...