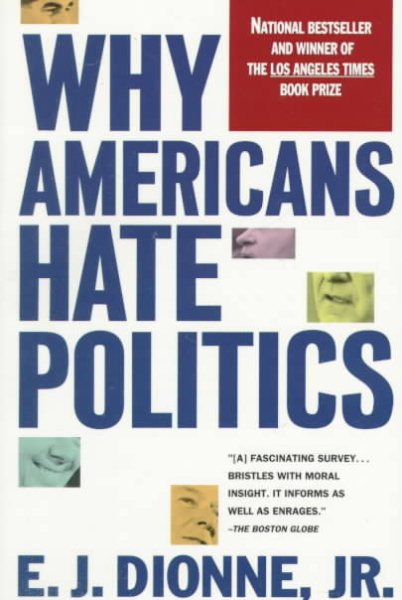 Analyzes apathy in American politics, arguing that name-calling and rhetoric have clouded the issues Read More
All over the United States, Americans are deserting the political process. Why? In this national bestseller, one of our shrewdest political observers traces thirty years of volatile political history and finds that on point after point, liberals and conservatives are framing issues as a series of "false choices," making it impossible for politicians to solve problems, and alienating voters in the process. Now with a new afterword discussing the Clarence Thomas confirmation hearings and the 1992 presidential election, Dionne explores what has gone wrong with the American system and offers a back-to-basics approach to politics designed to respond to the anger of America's restive majority. Read Less

Goodreads reviews for Why Americans Hate Politics: The Death of the Democratic Process

The Election of 2000: Reports and Interpretations (Election...

WHY AMERICANS HATE POLITICS: DEATH OF THE DEMOCRATIC PROCESS...