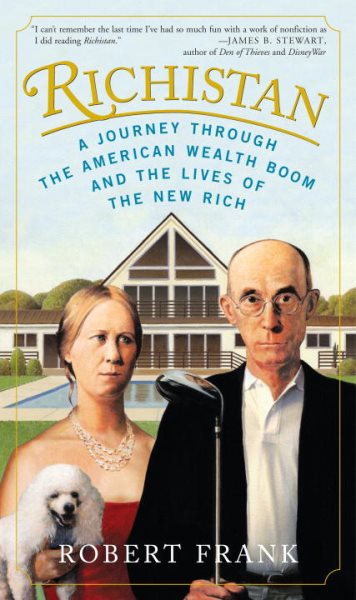 Journeys inside the world of America's new breed of multimillionaires to explore the real world of new money and its influence on American culture, society, and politics. Read More
The rich have always been different from you and me, but this revealing and funny journey through “Richistan” entertainingly shows that they are more different than ever. Richistanis have 400-foot-yachts, 30,000-square-foot homes, house staffs of more than 100, and their own “arborists.” They’re also different from Old Money, and have torn down blue-blood institutions to build their own shining empire. Richistan is like the best travel writing, full of colorful and interesting stories providing insights into exotic locales. Robert Frank has been loitering on the docks of yacht marinas, pestering his way into charity balls, and schmoozing with real estate agents selling mega-houses to capture the story of the twenty-first century’s nouveau riche:House-training the rich. People with new wealth have to be taught how to act like, well, proper rich people. Just in the nick of time, there’s been a boom in the number of newly trained butlers—“household managers”—who will serve just the right cabernet when a Richistani’s new buddies from Palm Beach stop by. “My boat is bigger than your boat.” Only in Richistan would a 100-foot-boat be considered a dinghy. Personal pleasure craft have started to rival navy destroyers in size and speed. Richistan is also a place where friends make fun of those misers who buy the new girlfriend a mere Mercedes SLK.“You want my money? Prove that you’re helping the needy!” Richistanis are not only consuming like crazy, they’re also shaking up the establishment’s bureaucratic, slow-moving charity network, making lean, results-oriented philanthropy an important new driving force.Move over, Christian Coalition. Richistanis are more Democratic than Republican, “fed up and not going to take it anymore,” and willing to spend millions to get progressive-oriented politicians elected.“My name is Mike and I’m rich.” Think that money is the answer? Think again as Robert Frank explores the emotional complexities of wealth.And, as Robert Frank reveals, there is not one Richistan but three: Lower, Middle, and Upper, each of which has its own levels and distinctions of wealth —the haves and the have-mores. The influence of Richistan and the Richistanis extends well beyond the almost ten million households that make up its population, as the nonstop quest for status and an insatiable demand for luxury goods reshapes the entire American economy. Read Less

Goodreads reviews for Richistan: A Journey Through the American Wealth Boom and the Lives of the New Rich

The Secret Life of the Dyslexic Child: How She thinks. How H...

Richistan: A Journey Through the American Wealth Boom and th...