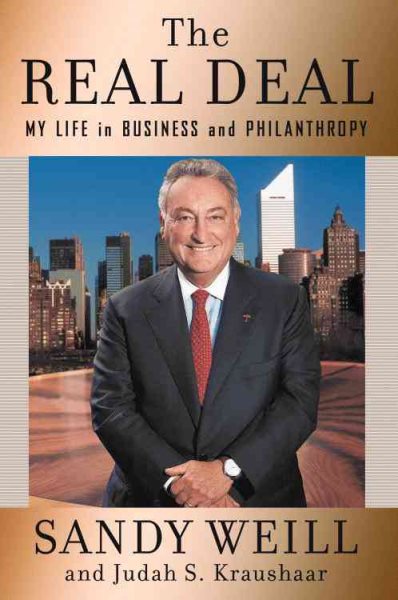 A business leader, financier, and philanthropist shares the story of his successful odyssey from a middle-class Brooklyn childhood, to head of American Express, to his new success as CEO and chairman of Citigroup. Read More
Shortly after we set up shop, the four of us and our wives convened at Arthur's home on Long Island to celebrate. It was a festive occasion, and we all openly shared our aspirations. To this day, I remember the others stressing over and over their desire to become wealthy. Given that Joanie and I were raising two toddlers and lived nearly hand-to-mouth, the talk was certainly seductive. Still, what I remember most from that dinner was my declaration that the money should be secondary-what mattered more to me was to build a great firm: one that would lead the industry, employ lots of people, endure over many years, and, importantly, command respect.Over the next forty-three years, I never altered my priorities."-from THE REAL DEALThe Sandy Weill story is truly one for the ages. Starting with $30,000 in borrowed cash in 1960, and relying on uncanny entrepreneurial instincts, Sandy created one of the leading securities firms in the U.S. and became one of the best known businessmen in the world. After selling his company to American Express and becoming its president, he experienced a professional setback. Undaunted, he cannily parlayed it into a second career, starting over with a sleepy consumer loan company called Commercial Credit, which over the next seventeen years he transformed into the leading global bank, Citigroup. During this span, Weill as chairman and CEO delivered an astounding 2,600 percent return to investors-better than legendary CEO Jack Welch or investor Warren Buffett during that same period.Yet success is never an easy path, and Weill divulges the highs and lows. His ascent to power has been documented by the media over the years, but never before has Weill revealed the brutally honest and unvarnished side of an astonishing life and career.And Weill goes further, sharing his love of philanthropy, a journey that took him "from a mediocre bass drummer in my high-school marching band to the chairmanship of Carnegie Hall." He brings readers into his personal life, introducing them to his wife, Joan, his daily inspiration, and discussing his relationships with competitors and colleagues alike, including proteges like Peter Cohen and Jamie Dimon. Along the way, he shares the most important lessons he learned in business and in life. From a middle-class Brooklyn childhood to corporate legend, philanthropist, financier, and chairman emeritus of Citigroup Inc., THE REAL DEAL tells a remarkable story-that of a financial superstar who always loved the game more than the gold. Read Less

Goodreads reviews for The Real Deal: My Life in Business and Philanthropy

The Real Deal: My Life in Business and Philanthropy