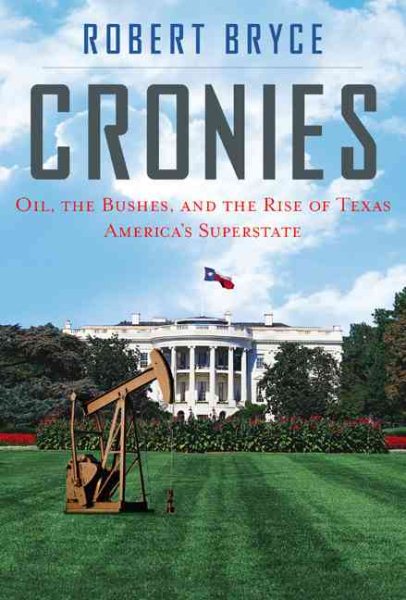 Looks at how the energy resources in Texas have influenced politicians and advanced economic interests of the oil industry. Read More
No other province holds more political and economic power than the Lone Star State. Two of the last three American presidents?and three of the last eight?have been Texans. Each of them got to the White House by exploiting a network of money and power that no other state can match. In Cronies, renowned investigative reporter Robert Bryce illuminates how Texas turned its vast energy resources into political power, and how a small group of Texas corporations, lawyers and politicians use that power to protect and defend their own economic interests. Through an absorbing narrative that moves from the days of the oil boom, through the rise and reign of LBJ, to today, Bryce profiles the Texans and the Texas corporations who have wielded?and continue to wield?great power in America's domestic and foreign policy, including the Bushes, James A. Baker III, Halliburton, Baker Botts, Ray Hunt, Bell Helicopter, and more. He shows how massive transfers of wealth from the rest of the country to Texas have allowed the state to prosper. Cronies demonstrates how George W. Bush is the living embodiment of Texas' crony networks, and how those networks continue to play critical roles in the 21st century. Distinguished by the same crack investigative skills and colorful storytelling that reviewers loved in Pipe Dreams, Cronies not only explains the astonishing rise of Texas; it offers a timely, provocative new way to look at American politics and our deadly entanglements in Iraq. Read Less

Goodreads reviews for Cronies: Oil, The Bushes, And The Rise Of Texas, America's Superstate