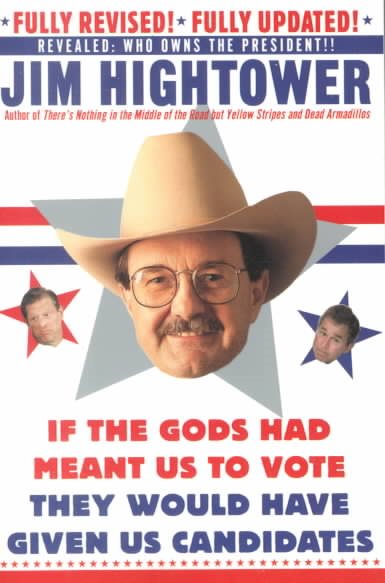 The outspoken critic of American politics urges readers to take back their political, economic, and cultural birthright at the polls. Read More
Jim Hightower, America's favorite subversive, is still mad as hell, and he's not going to take it anymore. But he will give you a sizeable piece of his mind on Election 2000. This plain-talking, name-naming, podium-pounding populist zeros in on everything that ails us, from the global economy and media to big business and election winners everywhere. In his hard hitting commentary and hilarious anecdotes, Hightower spares no one, including the scared cows -- and especially the politicians -- who helped steer us into this mess in the first place. An equal opportunity muckrucker and a conscientious agitator for "We the People", Hightower inspires us to take charge again, build a new politics for a better tommorow -- and have a lot of laughs along the way Read Less

Goodreads reviews for If the Gods Had Meant Us to Vote, They'd Have Given Us Candidates

Thieves in High Places: They've Stolen Our Country--And It's...