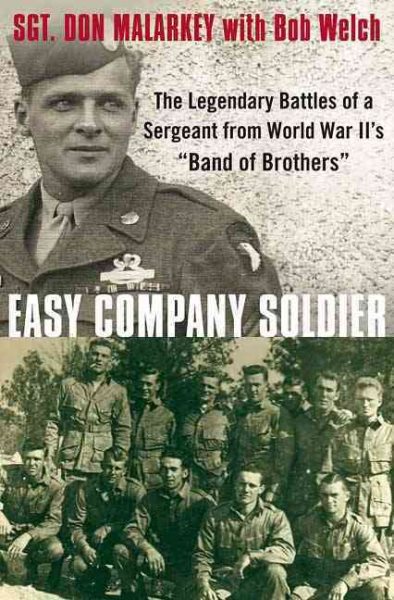 A "Band of Brothers" soldier and elite paratrooper describes his role in providing defense during 1943's Operation Overlord, his receipt of a Bronze Star and numerous other honors, and the loss of his best friend during the engagement at Bastogne. Read More
Sgt. Don Malarkey takes us not only into the battles fought from Normandy to Germany, but into the heart and mind of a soldier who beat the odds to become an elite paratrooper, and lost his best friend during the nightmarish engagement at Bastogne.Drafted in 1942, Malarkey arrived at Camp Toccoa in Georgia and was one of the one in six soldiers who earned their Eagle wings. He went to England in 1943 to provide cover on the ground for the largest amphibious military attack in history: Operation Overlord. In the darkness of D-day morning, Malarkey parachuted into France and within days was awarded a Bronze Star for his heroism in battle. He fought for twenty-three days in Normandy, nearly eighty in Holland, thirty-nine in Bastogne, and nearly thirty more in and near Haugenau, France, and the Ruhr pocket in Germany.This is his dramatic tale of those bloody days fighting his way from the shores of France to the heartland of Germany, and the epic story of how an adventurous kid from Oregon became a leader of men. Read Less

Goodreads reviews for Easy Company Soldier: The Legendary Battles of a Sergeant from World War II's "Band of Brothers"

52 Little Lessons from It's a Wonderful Life

52 Little Lessons from A Christmas Carol