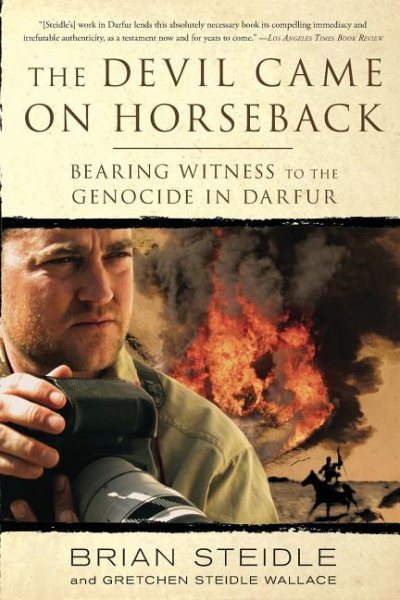 A former United States Marine, hired by the African Union to monitor the cease-fire agreement between the Government of Sudan and Darfurian rebel groups, offers an account of the ongoing genecide in Darfur and criticizes the international community's failure to intervene. Read More
Former United States Marine Brian Steidle served for six months in Darfur as an unarmed military observer for the African Union. There he witnessed first-hand the ongoing genocide, and documented every day of his experience using email, audio journals, notebook after notebook and nearly 1,000 photographs. Gretchen Steidle Wallace, his sister, who wrote this book with Brian, corresponded with him throughout his time in Darfur. Fired upon, taken hostage, a witness to villages destroyed and people killed, frustrated by his mission's limitations and the international community's reluctance to intervene, Steidle resigned and has since become an advocate for the world to step in and stop this genocide.The Devil Came on Horseback depicts the tragic impact of an Arab government bent on destroying its black African citizens, the maddening complexity of international inaction in response to blatant genocide, and the awkward, yet heroic transformation of a formerMarine turned humanitarian. It is a gripping and moving memoir that bears witness to atrocities we have too long averted our eyes from, and reveals that the actions of just one committed person have the power to change the world. Read Less

Goodreads reviews for The Devil Came on Horseback: Bearing Witness to the Genocide in Darfur

The Devil Came on Horseback: Bearing Witness to the Genocide...

Too Soon Old, Too Late Smart: Thirty True Things You Need to...