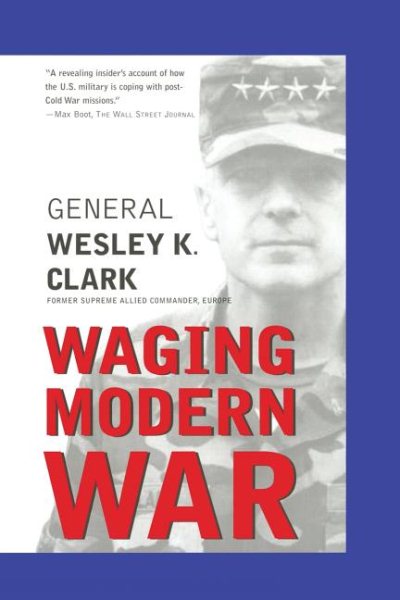 This memoir from the former NATO Supreme Allied Commander, now revised and updated, offers a unique behind-the-scenes look at how war is fought today Read More
In Waging Modern War, General Wesley K. Clark recounts his experience leading NATO's forces to a hard-fought and ultimately successful victory in Kosovo in 1999. As the American military machine has swung into action in the months following the attacks on the World Trade Center and the Pentagon, it has become clear that the lessons of Kosovo are directly applicable to the war against terrorism and the nations that sponsor it. The problems posed, and overcome, in the war in Kosovo-how to fight an air war against unconventional forces in rough terrain and how to coordinate U.S. objectives with those of other nations-are the problems that America increasingly faces in the today's world. As the Los Angeles Times noted in late September of 2001, this book's "lessons are highly relevant now?. We need to think about exactly what steps will lessen, rather than increase, the terrorist threat. And we also need innovative commanders willing to improvise to meet a new kind of threat, more determined political leadership, a more flexible outlook in the Pentagon?. Gen. Clark has performed another service by highlighting these problems at a crucial moment in American history."Waging Modern War is history, memoir, guidebook, and forecast, essential reading for those who want to know how modern war is fought, and won. Read Less

Goodreads reviews for Waging Modern War: Bosnia, Kosovo, and the Future of Combat