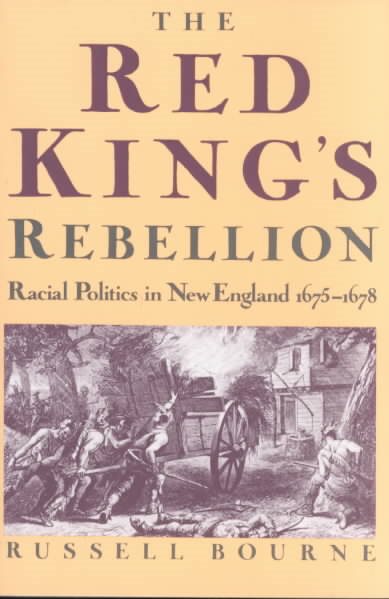 Discusses the causes and results of King Philip's War, in which the Algonquins nearly drove the white settlers out of New England Read More
"The Red King's Rebellion," fought more than three hundred years ago between the Algonquian peoples and New England settlers, was in per-capita terms the bloodiest war in our nation's history. Before the conflict ended, over 9,000 people were dead (two-thirds of them Native Americans), and homelessness, starvation, and economic hardship plagued the descendents of both races for generations to come. In this fascinating book, Russell Bourne examines the epic struggle from both sides, seeking to explain how the biracial harmony that once reigned--when the Plymouth Colony's neighboring Wampanoags, under the stately Massasoit (King Philip's father), shared their corn with desperate settlers--could degenerate into such mistrust and hatred. More than just a war, Bourne shows how it was a simultaneous rebellion on many fronts against inequalities practiced by white settlers, and demonstrates how it constituted a massive and tragic breakdown of colonial civilization.Distrusting the accounts of early nationalists as propaganda, and drawing on the recent work of archaeologists, the expertise of local historical societies, and his own considerable knowledge of the New England countryside, Bourne brings this turbulent era to life. We are led along the old Indian trails that once criss-crossed New England, we visit the settlements of colonists and Native Americans alike, and we meet a fascinating cast of characters. These include the intrepid settler Benjamin Church (who first sought to dissuade colonial leaders from slaughter, then taught them how to fight woodland battles), the radical preacher and trader Roger Williams (who had learned the native language and tried for decades to keep the cultures together), and Metacomet himself--soon to be known as King Philip--whom we glimpse striding proudly through pre-war Boston wearing "buckskins set thick with these beads [of wampum] in pleasant wild works and a broad belt of the same." Bourne weaves together character sketches, community descriptions, and, whenever possible, the words of both combatants and witnesses to fashion a gripping narrative account of a period that--in both its successes and failures--helped shape the nature of early America. The Red King's Rebellion helps us to understand not only the causes and effects of the war, but the importance and values of the men and women who tried to prevent it. And in an age when cultures continue to clash and quick, brutal actions still seem to offer easy solutions, it is a tale that demands renewed attention. Read Less

Americans on the Move: A History of Waterways, Railways, and...

Gods of War, Gods of Peace: How the Meeting of Native and Co...