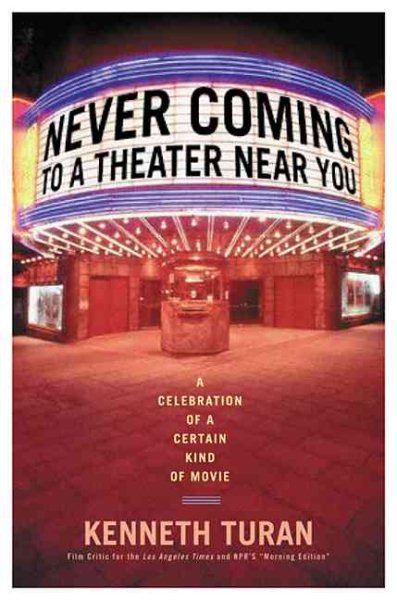 Presents a collection of movie reviews for English language films, foreign language films, documentaries, and classics which may have been forgotten by the reader. Read More
It is in the nature of today's movie business that while Hollywood blockbusters invade every megaplex, smaller, quality films often don't get screen time. Fans of finer films have to count on catching up with them on video and DVD, but even the most hard-core devotees have trouble remembering what sounded good when a film was originally released. Never Coming to a Theater Near You will remedy that situation. This selection of renowned film critic Kenneth Turan's absorbing and illuminating reviews, now revised and updated to factor in the tests of time, point viewers toward the films they can't quite remember, but should not miss. Moviegoers know they can trust Turan's impeccable taste. His eclectic selection represents the kind of sophisticated, adult, and entertaining films intelligent viewers are hungry for. More importantly, Turan shows readers what makes these unusual films so great, revealing how talented filmmakers and actors have managed to create the wonderful highs we experience in front of the silver screen. Read Less

Goodreads reviews for Never Coming To A Theater Near You

Call Me Anna: The Autobiography of Patty Duke

Free for All: Joe Papp, The Public, and the Greatest Theater...

Not to be Missed: Fifty-four Favorites from a Lifetime of Fi...