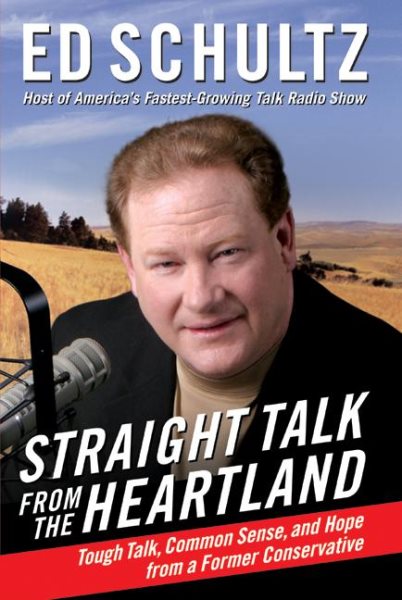 Ed Schultz discusses political topics from his liberal point of view, including international relations, the national deficit, and defense. Read More
Ed Schultz is here to slay the "right-wing radio dragon" and revitalize the charge against Bush-era "conservative cruelty" with his own bold, irreverent truth-talk. When the self-described "gun-toting, meat-eating, drug-free liberal" from America's heartland came out swinging with his syndicated radio program, The Ed Schultz Show, listeners realized right away that this was no cookie-cutter liberal, but a tough-talking advocate for everything that's right about the left. "A free press is all that stands between you and a dictatorship," warns Schultz, in defiance of the Bush administration and ultra-conservative talking heads like Rush Limbaugh and Sean Hannity, whom he blames for quashing political debate just when America needs it most. While Big Ed has what it takes to "go bare-knuckle brawling" with his staunchest detractors, it is with a deep compassion and impeccable common sense that he describes how our "government by the rich and for the rich" is imperiling the lives of average hard-working Americans.In Straight Talk from the Heartland, Schultz rails against the havoc that our nation's leaders are wreaking on everything from international relations to homeland defense, from our skyrocketing federal deficit to the disenfranchised families of rural America who are struggling to make ends meet. With a heady mix of patriotism, outrage, humor, and hope, he makes an urgent appeal to universal virtues such as honesty and liberty, and reminds readers of what he calls the Four Pillars of a Great Nation:Defending America: "We have lost faith in our leaders. The world has lost faith in us. Our foray into Iraq, to disarm a nation of biological and nuclear weapons they did not have, has shrunk American credibility like a cheap sweater."A Sound Economy: "The Bushies are like street hustlers. While they show you a meager tax cut with one hand, they steal your wallet with the other."Feeding the Nation: "Bad farm policy and bad trade agreements are running the American farmer off the land. It's killing small towns, and small towns are the heart of this nation."Educating America: "Don't start counting your tax break just yet. Your state and local taxes are rising to support the unfunded mandate of the No Child Left Behind act.""I'm here to give it to you straight," Big Ed says. "I've got faith that, when Americans grasp what's going on around them, they'll start acting like a bear fresh out of hibernation -- famished, ill-tempered, and ready to start raising hell."Straight Talk from the Heartland is the wake-up call America has been waiting for. Read Less

Goodreads reviews for Straight Talk from the Heartland: Tough Talk, Common Sense, and Hope from a Former Conservative

Killer Politics: How Big Money and Bad Politics Are Destroyi...