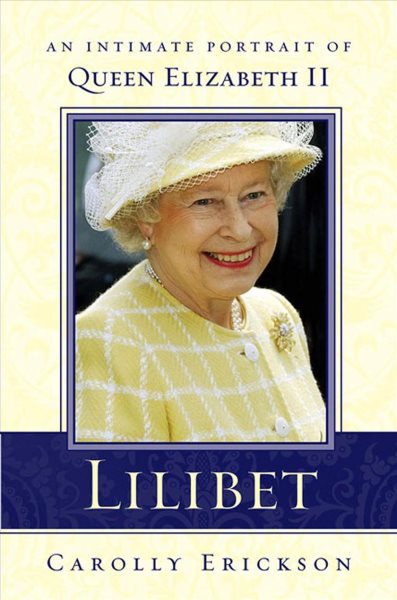 The acclaimed biographer and author of The First Elizabeth pens a complex and intimate study of Queen Elizabeth II, from her protected childhood, to her ascension to the throne at the age of twenty-five, to the personal and national challenges she has confronted during her fifty years on the throne of Great Britain. Reprint. 20,000 first printing. Read More
In Lilibet, master biographer Carolly Erickson turns her skill at writing un-put-downable narrative to telling the remarkable story of Elizabeth II, Queen of England.With her customary psychological insight, historian Erickson traces the queen's gilded but often thorny path from her overprotected girlhood to her ascension to the throne at twenty-five to her personal and national difficulties as queen.Lilibet shows us an Elizabeth we thought we knew-but shows her in a different light: as a small, shy woman with a sly and at times raucous sense of humor, a woman who appears stiff in public, but in private enjoys watching wrestling on TV. A woman most at home among her horses and dogs. And a woman long annealed to heartbreak and sorrow, who has presided over the decline of Great Britain and the decline in prestige of her own Windsor dynasty.Far from being a light, gossipy treatment of a celebrity, Lilibet tells the queen's story from her point of view, letting the reader relive Elizabeth's long and eventful life with all its splendid ceremonies, momentous responsibilities and family clashes. Through it all we glimpse, as never before, the strong and appealing sovereign who has ruled over her people for half a century and more, a ruler of immense wealth, international esteem and high character whose daily life is grounded in the bedrock of common sense. Read Less

Goodreads reviews for Lilibet: An Intimate Portrait of Elizabeth II

The Last Wife Of Henry Viii

Our Tempestuous Day: A History of Regency England