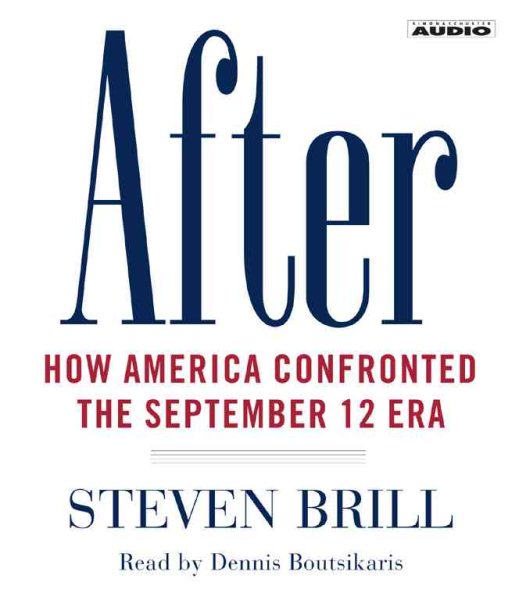 Through interviews, court documents, and government memos, the author describes life in the United States after the September 11 terrorist attacks. Read More
After is an astounding, inspiring, and exciting account of America in the first year of the September 12th era. Based on 347 on-the-record interviews and revelations from memos of government meetings, court filings and other documents, award winning journalist Steven Brill takes us inside the critical dramas of the year after the September 11 attacks -- from the Justice Department's drive to find terror cells, to Congress's decision to bail out the airline industry, to a Ground Zero real estate mogul's audacious plan to litigate his way to an extra $3.5 billion in insurance proceeds. In After we go inside the late night audiences that lobbyists get with congressional leaders like Tom DeLay. We're in the White House sub-basement as the mammoth Department of Homeland Security is patched together, agency by agency. And we're in a young widow's living room as she struggles to hold her family together and make sense of the various charities and government funds that may be available to her. But beyond being a masterpiece of reporting, After is a riveting narrative of people -- some well known, others not known at all -- facing the defining challenge of their lives. As their paths cross in a series of surprising alliances and confrontations, Brill finds in their stories the answer to how America changed and prevailed. After is an indelible picture of America and Americans battling their way through a time of crisis. And we see that Americans and their country were anything but soft when it came to standing up the morning after. Read Less

Goodreads reviews for After : How America Confronted the September 12 Era

The Broker: A Novel (John Grisham)

The Innocent Man: Murder and Injustice in a Small Town (John...