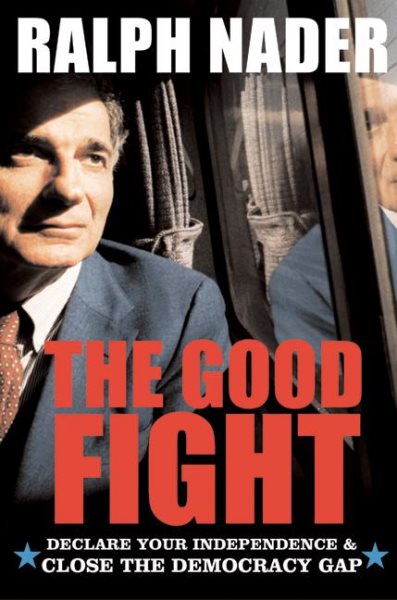 Provides a review of the social, economic, and political conditions in the United States and how citizens can fight for improvement. Read More
The man who shook up American politics in 2000—and is doingso again in 2004—returns to hold both parties' feet to the fire with his straight talk about Bush, corporate government, and the whole political charade.Ralph Nader—relentless activist, brilliant visionary—may also be the most honest man we've got left in politics. And yet from the moment Nader declared his presidential candidacy on Meet the Press, he's faced relentless opposition, mainly from Democrats fearing that competition from an inspiring independent could dent their voting block "as it did in 2000." Even his old pals at The Nation joined in the party panic.Now, in The Good Fight, Nader swings back harder than ever at those who "want to block the American people from having more voices and choices" and have lost touch with the concept that votes must be earned, not inherited or entitled. He takes on corporate-occupied Washington and the government's daily abuse against ordinary citizens: "Corporations are saying no to the necessities of the American people. They're saying no to health insurance for everyone, no to a living wage, no to tax reform, no to straightening out the defense budget, which is bloated and redundant, no to access to our courts." And most of all, he urges a speedy return to stronger civic motivation. If fed-up citizens don't actively join the fight for improvement, then ultimately we have no one to blame but ourselves for the inadequate checks on the erosion of our civil liberties.In an era when politicians sell us rhetoric and then sell out our principles, Nader stands as a crucial voice of candor. The Good Fight is a call to awareness and action that will captivate readers of all political stripes and help us define what we must do to shape the brightest future for our nation. Read Less

Goodreads reviews for The Good Fight: Declare Your Independence and Close the Democracy Gap