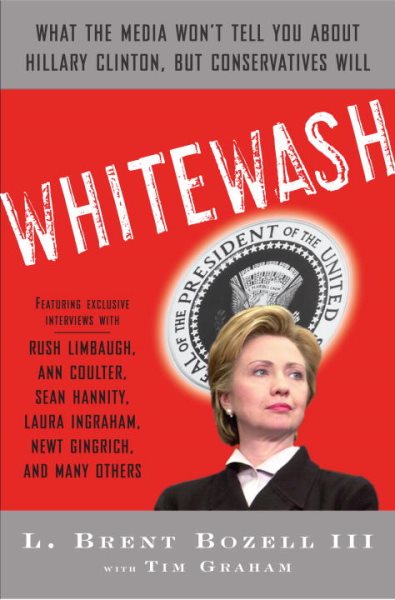 Argues that the liberal media has systematically downplayed Clinton's personal, political, and financial shortcomings in order to help build her political career and pave her way for a presidential campaign. Read More
“The overriding question is: Why Hillary? Here we come to 2008 and she is the de facto nominee. . . . But what has she done?”—Rush Limbaugh, in an exclusive interview for Whitewash Amid all the discussion of Hillary Rodham Clinton’s presidential prospects, the most important question is ignored: Why Hillary? How did the First Lady to a disgraced, impeached president become a presidential front-runner despite never having held elective office before 2001; her staggering number of personal, political, and financial scandals; and her leftist political agenda?The answer is that for two decades she has had the most powerful weapon in politics—the national “news” media—shamelessly promoting her presidential aspirations.In Whitewash, L. Brent Bozell III and Tim Graham of the Media Research Center, America’s preeminent media watchdog organization, expose the unprecedented media favoritism that is the real key to Hillary’s political career. Marshalling stunning evidence compiled exclusively by the Media Research Center, the authors show how the media have relentlessly promoted Hillary from the moment Time magazine introduced her to the country as an “amalgam of Betty Crocker, Mother Teresa, and Oliver Wendell Holmes.” To expose the truth about Hillary that the supposedly objective media have buried, Bozell and Graham have interviewed dozens of leading conservatives who are fighting to let Americans hear the whole story: Rush Limbaugh, Newt Gingrich, Sean Hannity, Ann Coulter, Mark Levin, Mary Matalin, Laura Ingraham, Cal Thomas, and many others.Whitewash reveals:• How the frequent claim that no one has been more investigated than Hillary Clinton is not just incorrect, but utterly absurd• How prominent female reporters admit that they’re “rooting” for Mrs. Clinton, their “mascot”• The surprising ways Hillary’s media allies have tried to fend off Barack Obama’s challenge • How the national media continue to promote Mrs. Clinton’s socialist health care takeover as “ahead of its time”• The network news anchor to whom Hillary gushed, “Thank you. Thank you. Thank you.” • The Republican congressman who tells how the Clintons “went after” him “mercilessly” for daring to investigate Hillary scandals• How the press ruthlessly attacks anyone in the alternative media who dares challenge HillaryMrs. Clinton’s media flacks deride every negative charge against her as “old news,” but Whitewash shows that Hillary’s pattern of deception, corruption, and overreaching political schemes has been repeated again and again precisely because the media ignore the scandalous behavior. And the pattern will be repeated in 2008 and beyond if Americans aren’t exposed at last to the truth that the servile national media have obscured. Read Less

Goodreads reviews for Whitewash: What the Media Won't Tell You About Hillary Clinton, but Conservatives Will

Diana, Princess of Wales, A Tribute