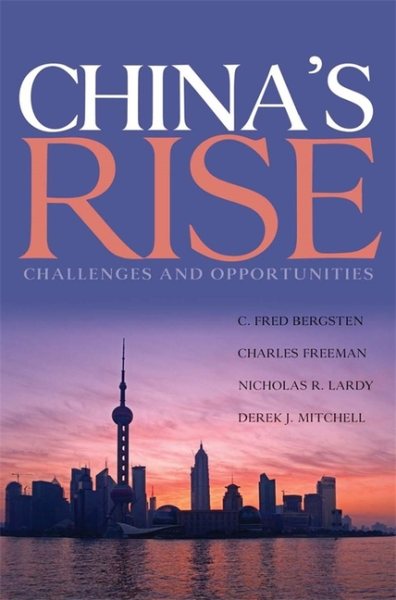 Expert judgments of China's confrontation with domestic challenges that are side effects of its economic successes, and of its simultaneous exploitation of foreign policy benefits of those same successes. Read More
China has emerged as an economic powerhouse (projected to have the largest economy in the world in a little over a decade) and is taking an ever-increasing role on the world stage. China's Rise: Challenges and Opportunities will help the United States and the rest of the world better comprehend the facts and dynamics underpinning China's rise—an understanding that becomes more and more important with each passing day. Additionally, the authors suggest actions both China and the United States can take that will not only maximize the opportunities for China's constructive integration into the international community but also help form a domestic consensus that will provide a stable foundation for such policies. Filled with facts for policymakers, this much anticipated book's narrative-driven, accessible style will appeal to the general reader. This book is unique in that it analyzes the authoritative data on China's economy, foreign and domestic policy, and national security. The expert judgments in this book paint a picture of a China confronting domestic challenges that are in many ways side effects of its economic successes, while simultaneously trying to take advantage of the foreign policy benefits of those same successes.China's Rise: Challenges and Opportunities from The China Balance Sheet Project, a joint, multiyear project of the Center for Strategic and International Studies and the Peterson Institute, discusses China's military modernization, China's increasing soft power influence in Asia and around the world, China's policy toward Taiwan, domestic political development, Beijing's political relations with China's provincial and municipal authorities, corruption and social unrest, rebalancing China's economic growth, the exchange rate controversy, energy and the environment, industrial policy, trade disputes, and investment issues. This book is part of the CSIS-IIE China Balance Sheet project. For more information about this project, please visit www.chinabalancesheet.org. Read Less

Markets Over Mao: The Rise of Private Business in China